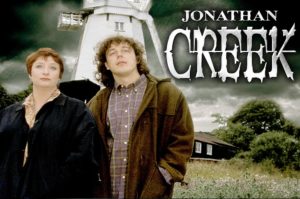 I recently went back to watch this classic to see if it stood up to the test of time and if my memories of it were accurate. It was dedicated on a simple premise that geek Jonathan Creek who lived in a windmill and was employed as a magician’s inventor could solve crimes that were an intriguing and complex puzzle that would fool Penn and Teller.

Whilst beguiling and interesting, the solutions to each crime felt totally preposterous and whilst you did marvel at how he solved them, they became increasingly bizarre and hard to believe. It was for me, at first viewing, a delight and a challenge and having watched them again, they work better and apart from one where I still find it utterly daft, they do stand up to the test of time – more or less.

Socially awkward Creek first gets involved in cracking cases because of a journalist who kind of fancies him but will not admit it. Creek, played by English comedian, Alan Davies, bumps into Maddy Magelan, played by Caroline Quentin, who is a faintly annoying writer looking for stories where she gets to right wrongs. Their interplay works really well, and it set up the whole series that flowed perfectly. When Quentin left, that chemistry was lost to a certain extent, but replaced by a number of leading ladies who added rather than detracted from the premise, but it still felt like we had been relegated down a division.

To be fair it was never a stable part of scheduling and appeared here and there and now and again, twice spawning Christmas specials – a mainstay of regularly well regarded and popular series on British TV. From 1997 to 2004, it was Quentin who played opposite Davies then in 2001, Julie Sawalha replaced her as a new character, Carla Borrega, a theatrical agent who is a television producer. On its return in 2004, Sheridan Smith, playing a paranormal investigator, Joey Ross replaced Sawalha with three 90-minute specials from 2009 to 2013. Finally, series 5 which was broadcast in 2014 saw Creek married to Polly, played by Sarah Alexander in three episodes before a final one off in 2016 saw the series come to an end.

It had plenty of well-known British TV actors in supporting roles throughout all five series including Bob Monkhouse, Rik Mayall, Griff Rhys Jones, Nigel Planer, John Bird, Bill Bailey, Ade Edmondson and Warwick Davies. In the US it was aired by PBS and then BBC America.

It was great because it never treated itself too seriously. The magician for whom Creek worked was an old school, unreconstructed misogynistic chauvinist who preyed on pretty assistants. Adam Klaus was originally played by Anthony Head, but he went on to Buffy the Vampire Slayer and left. Series 1, beyond the pilot, had him mentioned much in the background until in series 2 he was replaced by Stuart Milligan. He brought perfect poise and a lack of grace! His loss was deeply felt for me, when after the 4th series he was gone, and the show lost some of its comic charm. I think Creek having a wife and sucking up to convention ruined the whole darn thing. It was funnier to have an unlucky, socially awkward guy in a windmill who was fancied by people who thought he was a genius but could not quite bring themselves to say so whilst they were all having to deal with an overly suggestive magician, worked.

Removing some of the successful elements is a choice, I suppose, writers make to ensure relevance and avoid it being stale. I just felt that Davies, who played Creek in his own duffel coat was perfectly cast, his four female companions fit within the Dr. Who style English genre of the piece and their lack of connection underlined that innocence around the relationship. It allowed for his focus on mysteries in which he did not want to get involved until tricked to be so; it was an endearing and beautifully crafted piece of originality.

There were attempts to remake it for the US including CBS having Whoopi Goldberg and Alan Davies onboard, but it was not to be. Of the magician solving crime genre, it is top of its limited tree though The Magician from the 1970’s and the 1980’s Blacke’s Magic made a decent go at it. For me, it was the best by distance. And the first few series stays long in the memory. There are rumors of a comeback but no firm plans…

I would love a recently divorced, socially awkward former magician’s technician in search of a vacant windmill show to emerge from its ashes. But what’s the chances, eh?