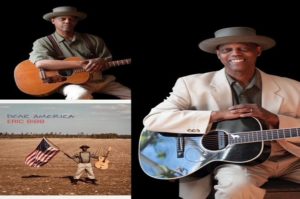 Eric Bibb is without a doubt one of the most underrated Blues singers and guitarists in music. He won several awards in his career and was nominated twice for a Grammy. His latest album “Dear America” was released last year. Go check him out Live. You won’t regret it.

KB: You grew up in a musical family with your dad being a singer: Was he a big influence for you to become a singer musician too?

Absolutely! He was my first role model as a performer. From very early age he included me in his world of music.

KB: Paul Robeson was your Godfather? Was he a big influence in your life?

Yes, his stance as an artist who championed freedom from oppression for African peoples and all of humankind, continues to inform my own artistry.

KB: What advice did Bob Dylan give you on playing the guitar? How old were you when you met him?

I was eleven years old when I met Bob Dylan, who was twice my age at that time. This was at a late-night party my parents hosted at our home, where I walked up to him and said” Hi, I’m Eric, I play guitar too!”. Dylan advised me to” Keep it simple, forget all that fancy stuff”.

Obviously, as an African American, the historic and ongoing racism in America is behind all the bad and ugly.

KB: You were nominated twice for a Grammy and several times for Blues Music Award where you won 3 times: Why aren’t you more well-known? You should be world famous!

I guess it depends on one’s definition of” world famous”. If you mean someone who’s known all over the world, then I’m already world famous, because my fan base is global.

KB: Last year you released a song about the lynching of Emmett Till: What inspired you to write the song? How was it working with a Legend like Ron Carter?

The murder of Emmett Till continues to inspire artists like myself, because it reminds us that the dark ignorance behind the deed is still with us. I first met (and played with) Ron Carter when I was sixteen years old, playing in the house band of my father’s television show,” Someone New”. Ron Carter was the original bass player in that band. Reconnecting with him was a wonderful experience.

KB: You are living in Stockholm, Sweden? Why Stockholm?

Well, everybody lives somewhere! My troubadour life has taken me to many countries. Having discovered Sweden on a family trip already as a teenager, I returned on my own as a young man and since then I’ve lived most of my adult life here in this north country fair.

KB: If you were to make an album with 7 of your most favourite songs (no songs of your own): Which songs would you pick and why?

How about three? 🙂 Off the top of my head: Alabama March by J.B Lenoir, because it’s one of the best songs I’ve ever heard. Here’s To Life written by Artie Butler, because Shirley Horn’s beautiful version makes me wanna sing it. Daisy Bell (Bicycle Built For Two) by Harry Dacre, because I’ve loved it since I first heard it as a child.

KB: You had an album released last year: Were you able to promote it due to Covid or are you touring now? Any plans for new material? Ever thought of writing your memoirs?

Due to the wonders of the digital age, we’ve been able to promote my latest album Dear America despite the absence of touring. The pandemic compelled all of us to reconsider how we live our lives and I’m grateful to have been able to continue sharing my music in new ways. I look forward to performing live again. However, my old life as a musician constantly on the road is over. What usually happens when I release an album is that I continue working on the next album (which is already in progress) more intensely. In other words, I’m writing and recording all the time. Yes, I’ll keep you posted about the memoirs.