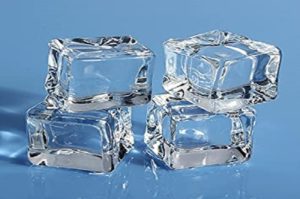 As I opened the refrigerator door in search of that last piece of cake hidden in the bottom freezer shelf, I was assaulted.

Pieces of Ice came loudly tumbling out, overflowing shelves, and catapulting themselves onto the floor

This was not acceptable behavior!!!

It was our own refrigerator. How could it do that to us! I felt personally affronted by this device. Why couldn’t it just behave?

After the offender was repaired and the floor mopped, I thought about ice. People have been using ice for a long time to protect foods from perishing, even before electricity was readily available in the home.

Many years ago, even before I was born, ancient people stored their food in nearby cold lakes and rivers. And then in winter, they dug pits into the ground and covered the food with snow and ice.

I cannot imagine lugging stuff down to the river or to those wintery storage pits and then dragging my perishables back to my house.

Things got a little better when the 1800s rolled around. Somebody had the bright idea of building cabinets made of wood or metal. And if you had one of these new-fangled iceboxes, you could have an ice company deliver ice to you. A little better. But still, it is hard for me to conjure up an image of walking outside to my icebox, carrying a container with a tool to chip away at the ice and then carting it back to my house.

When were refrigerators born? What fertile mind first thought of a refrigerator right inside your home?

Dr. William Cullen was a Scottish physician at the University of Edinburgh holding a dual position in Chemistry and Medicine. In 1756, he was the first to publically demonstrate artificial refrigeration. He had a container filled with diethyl ether. Using a pump he was able to create a partial vacuum over the container, which lowered the boiling point of the diethyl ether. The ether boiled absorbing heat from the surroundings of the container… and voila! the end product was a tiny amount of ice.
Of course, it was not practical for home use; but it was a start.

Inevitably, the first refrigerator for home use arrived.

Wolf formed a company called DOMELRE which stood for Domestic Electric Refrigerators. This company was among the first to bring electrical refrigeration into the home. And his refrigerators knew how to keep ice in its place! DOMELRE devices used freezing trays wherein the feisty little cubes were safely secured.

It was a long road from icebox to domestic refrigerator

And so we give thanks and never forget our colleague, Dr. William Cullen, who was the first to demonstrate the cooling effect when a liquid is rapidly evaporated into a gas.

Now, if there was only a way to control my occasional recalcitrant and sometimes diabolical icemaker!