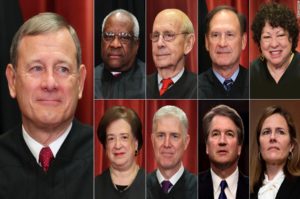 Remember to set your clocks back 60 years tonight folks because the Supreme Court’s latest decision is another to add in the time warp they’re taking our country into. In another 6-3 decision, the U.S. Supreme Court has ruled in favor of a high school football coach praying to his team before a game. As Christine Organ for Motherly states it, “On its surface, the ruling might seem fairly benign—but it isn’t. It overturns decades of previous decisions regarding prayer in school, and as a (non-Christian) person of faith, this decision absolutely terrifies me.” She is absolutely right.

The case referred to is Kennedy v. Bremerton School District. It involved a coach whose private prayers grew once players joined him visibly to pray post-game at the 50-yard line. The school district offered the coach a different location to pray at, but he refused and was ultimately put on paid administrative leave. Following his leave, he received a poor performance evaluation which led to him filing a lawsuit against the district. The outcome found by the lower courts were that his speech was not covered under the First Amendment; and SCOTUS’s decision shows they definitely disagreed with the previous rulings.

Justice Neil Gorsuch wrote the Court’s opinion, writing that “The Constitution and the best of our traditions counsel mutual respect and tolerance, not censorship and suppression, for religious and nonreligious views alike.” In the Court’s dissent, Justice Sonia Sotomayor wrote on how the 6-3 ruling by a conservative majority weakens the separation of church and state. “It elevates one individual’s interest in personal religious exercise, in the exact time and place of that individual’s choosing, over society’s interest in protecting the separation between church and state, eroding the protections for religious liberty for all,” Sotomayor stated. “Today’s decision is particularly misguided because it elevates the religious rights of a school official, who voluntarily accepted public employment and the limits that public employment entails, over those of his students, who are required to attend school and who this court has long recognized are particularly vulnerable and deserving of protection.”

For 60 years the Supreme Court has rejected public prayer in schools. In 2000, the Court ruled that student-led prayer at high school football games was in violation of the First Amendment’s prohibition on government establishment of religion. This current Court, however, continues to reverse every case that’s been precedent for the last half-century. They really are taking us back to their image of the good ole days.