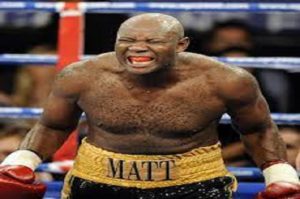 The Bedford Banger, Matt Skelton, 28-9, 23 KOs, made a name for himself in the boxing ring but he also managed to be active both in MMA and in kickboxing before arriving in the pugilistic arts. Though he was undefeated in MMA – to be fair he fought only once – in kickboxing he managed 63 wins out of 71 fights, an impressive total which meant that, by the time he got to the square ring he was already quite the heavyweight warrior and a world champion.

His delay in getting to the boxing ring meant that he was old when he became a professional boxer – 35! Despite this he was hugely successful in the ring, becoming British, Commonwealth and European title holder for several years at heavyweight. He also got a chance to fight for a world title- the WBA – in 2008. Not bad for an old man…

His wider influence comes also as an advocate, as a black man, for black equality. When Anthony Joshua got some backlash for appearing at a Black Lives Matter demonstration, Skelton was having none of that criticism. In a Sky Sports interview he said, “I’ve got so much admiration for him (Joshua). I sparred with him a couple of times after losing to him. He’s the poster boy for boxing. What boxing needs. I commend Anthony Joshua for making that speech. A lot of public figures would have wanted to make that speech but would have worried what it would have cost them.”

In the interview he was to expand on his own philosophy and way forward and I am grateful to have found this as it chimes with my own views. He said, “I want to sit down with a racist and say, ‘Why are you racist?’ It may be that he was beaten up by black lads when he was younger. But then I’d explain how I used to be attacked by white skinheads, and I’d ask, ‘So why aren’t I racist now? It’s not about black and white races. It’s about one race, the human race. Everyone has to be vigilant. If I’m with other black men and they start saying things about white people, or Asian or Chinese people, I have to pick them up on it.”

We, however, pick up on his development as a sports star and in that story, his first title of note came in kickboxing/Muay Thai when he became the International Kickboxing Federation (IKF) world champion in 2000, stopping Jeff Ford of the USA in Southampton. He defended the title but then lost. He reflected that his way into boxing was no planned pathway, “Getting into boxing was purely accidental. I had 33 unbeaten fights in Muay Thai, but then lost. After losing I realized, I was mainly sparring cruiserweights. I needed to find more heavyweights, so I went to a boxing gym. I sparred with Matthew Ellis, a top 10 British fighter at the time, and his dad said, ‘Have you thought about pro boxing?’ I was then fortunate to get in with [promoter] Frank [now Kellie] Maloney and I fought for the English title in my eighth fight. My age was against me, I’d fight anyone.”

In September 2002, the 22nd to be precise in Southwark, London, he made the crossover into the square ring, knocking Gifford Shillingford out in the 2nd round and there is little doubt that his initial flurry was greeted by people thinking he was simply an unrefined patron of the new art. But what he had was intense power. If you could make a career out of that power, Skelton was going to try and do so.

2003 saw him stop plenty before 2004 gave him his first real test, Julius Francis, former British and Commonwealth champion. Skelton beat him on points, at York Hall and became the English heavyweight champion. He now had two belts – a world title and an English title. It was clear which one would be likely to lead to better riches.

He then took on Michael Sprott for the British and Commonwealth belts, on the 24th of April in Reading. Skelton stopped him in 12. His first defense, against Keith Long, was another stoppage for Skelton, this time in 11, on the 19th of November in York Hall.

2005 brought him the WBU championship and his world title, knocking out Fabio Moli, on the 25th of February in Wembley. His profile was about to hit the heights of terrestrial TV as his promoter, Frank Warren had a deal with ITV that saw him and many in Warren’s stable get huge publicity and exposure.

In July 2005, he was due to face Danny Williams. When Williams pulled out with flu, Skelton stopped his replacement in 7 rounds – Mark Krence in Bolton. One further defense of his British title – in the Excel Arena, Dockland, London in December 2005, with a first round knockout of John McDermott meant that he had got his Lonsdale Belt outright – having defended it three times – so he vacated it.

Having beaten Michael Sprott and been disappointed by Danny Williams, Skelton was about to become part of a group of British heavyweights that would dominate the next few years domestically, though they would not reach world title level in the way that they promised in their fights. Sprott, Williams, Skelton and Audley Harrison were domestic box office. Their matchups gave us much to debate. That they did not end up fighting like AJ and Fury for world honors was a disappointment we could live with – they lit up many a night of boxing.

In February 2006, Skelton faced Williams in the Excel Arena, Dockland, London and lost on a split decision. Having vacated his British title, Williams had now taken his Commonwealth one.
It was his first professional loss. Five months later he avenged the loss and got his Commonwealth title back in Cardiff when he beat Williams in points.

Harrison then appeared in the picture and Skelton was slated to face him, but the fight never happened for his Commonwealth belt. Instead, he faced Sprott again, at the 02 Arena, London, and beat him once more – this time on a majority points win.

It led to the 2008 scrap in Dusseldorf against Ruslan Chagaev for the WBA belt. Skelton looked out of his league and when he began to resort to rough house tactics more suited to his former roles in combat sprots, the result became a foregone conclusion – Chagaev defended his crown by unanimous and wide decision. In his interview with Sky Sports, Skelton was sanguine and very honest about the fight saying, “It was a difficult camp. We couldn’t agree the purse. In the end Maloney said, ‘Just go out there (Germany)’. It wasn’t great money, and no one thought we were going to win. Chagaev had an immediate rematch clause, even if we did. I felt I was doing well in the early rounds, but his experience came through and he was just doing enough to win rounds. I knew I’d lost the fight… I didn’t have belief in my boxing ability. Some of my sparring – not blowing my own trumpet – was amazing, but in the ring I always went back to what I knew best, slugging… When I tried to throw a punch, my right leg would come off the canvas in preparation of a roundhouse kick. I’d always cross my feet and the trainers would say I wasn’t planting my feet and putting weight into my shots. I’d also crowd my work. I’d find myself up close, because in Muay Thai you’d throw elbows and knees from there. But in boxing you need distance.”
In December that year, Skelton returned and won the European title when he beat Paolo Vidoz in a bizarre fight where Skelton begged the referee to stop the fight after Vidoz was in some distress in round nine in Milan!

He then came back on the 28th of February in Birmingham, to face a new guy on the heavyweight scene who had just beat Audley Harrison, Martin Rogan. Defending his Commonwealth belt, Skelton was expected to sort out this taxi driving upstart from Belfast. He didn’t and was stopped in the 11th round!

Next up was Francesco Pianeta for the EBU-EU title. Skelton lost after being unable to continue after suffering hand injury in the 8th round. In January 2010 his run of bad luck continued as he lost to Kubrat Pulev in Neubrandenburg before he sought redemption in the Prizefighter initiative from Matchroom Boxing.

Having got through the first two rounds he found himself in the final to face a familiar foe – Michael Sprott. This time it was not to be as it had been twice before – instead of winning, he lost on a split decision. It was Sprott’s 50th contest.

His career was to have a 5-month hiatus from December 2010 as he was jailed for perverting the course of justice – he gave false names when stopped for speeding in his vehicle three times!
When he came out, he didn’t fight in 2011 but returned in 2012 in a fairly inauspicious run of contests which brought his career to an end. His last three – all losses – saw him take on David Price for the British and Commonwealth titles but was knocked out in the 2nd round in Liverpool on the 30th of November 2012, lose an English title fight in the 15th of March 2013 against John McDermott on points in York hall before finally facing another young prospect – Anthony Joshua in Liverpool on the 12th of July 2014, being stopped in the 2nd.

Skelton’s career was one filled with promise and possibility. He achieved a great deal and, perhaps, along with Williams, Harrison and Sprott, all of whom fought for world titles but none of them won any, they were a time of great disappointment for the British boxing scene. People can argue that they were sluggers, unrefined proponents of the arts and flattered to deceive. But what they were was good honest professionals fighting their fight at a time of great opportunity. That they flew close to the sun should be celebrated as we can look back and debate their prominence and importance. It adds to our experience as they added to the ring experience of all they met within it.

As for Skelton himself? “No regrets. If I’d have come over earlier, I’d have been in the mix with greats like Mike Tyson. As for British fighters, Frank Bruno dominated the British public. He was so popular. And there was Lennox Lewis who was probably underrated even. I think the British public didn’t take to him because of his connections with Canada.”

It was a decent career which has led to a retirement filled with dedication to others as Skelton, according to that interview with Sky Sports reported, “I started doing some charity work with British Servicemen and that led to an NVQ in Health and Social Care. We work with veterans of all ages. With a lot of the young guys, their problems are drug related. Some of the older guys went into the army to create the sense of family they were missing and then struggle when they’re out on their own. I’ve still got the little gym. Just a boxing gym and we’ve got a few light weights. We have an amateur club three days a week and then fitness classes. I’m looking at doing some probation work. Guys come out and they’re not used to civvy life, they’re getting into trouble.”

And that is the very epitome of a legacy in the sport from someone who others may dare to dismiss but is a hero in many eyes including my own.