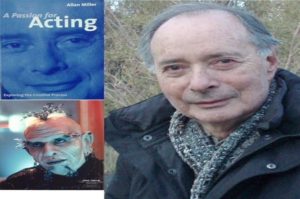 Allan Miller is an actor, director, playwright who studied with Marilyn Monroe and James Dean at Lee Strasberg’s Actor’s Studio in New York. He played Inspector Cramer in the TV show “Nero Wolfe”. He is an acting coach with Barbra Streisand and Meryl Streep as his pupils. He is 93 and just retired from acting last year.

KB: Did you always want to be an actor or rather a writer or playwright?

No, no, no! I was in the Army at the age of 17, stationed on occupation duty in Japan. They assigned me to the Quartermaster Corp, 14 miles outside Tokyo, driving a supply truck in the winter of 1946. I would have done anything to stop driving that unheated truck and live in Tokyo. One day there was a notice in the Army paper stating, “Actors Wanted for Special Services – in Tokyo.” All I saw was “In Tokyo.” I wangled a pass, met some people, and was asked to read a script. Turned out I was a good reader, I was asked to transfer to their entertainment unit, and I did.

KB: You studied at The Actors Studio with Lee Strasberg. Your classmates were James Dean, Marilyn Monroe, and Paul Newman? How was it studying with them?

The same as everybody else, except that Dean was very short sighted, and commented rarely, but when he did it was very pointed and pertinent. Marilyn emanated sadness; and no one sat near her in class, until one day I decided to socialize a little, and when I got near her, she lit up and called me by name to ask if I’d like to sit with her. It turned out she had memorized almost everyone’s name in the sessions. She actually was going to bike ride across the Brooklyn Bridge to take two recently born kittens from my apt in Brooklyn back to her hotel to mother them. The hotel refused to let her bring them in!

KB: You are an acting teacher and some of your students were Barbra Streisand and Meryl Streep? If you look at what they have become you must be very proud.

Proud is hardly the definition. Barbra was only 15 when she started studying with me, at the request of my wife at the time, Anita Cooper. After having her to dinner with us, I was so taken with her naiveté and curiosity, that I gave her a scholarship to one of my classes. In no time she was attending all my classes and had become our live-in babysitter. There was nothing she wouldn’t try in class, and after several months I directed her in a short play and realized I had to begin making up exercises for her to understand and perform the role. It was a giant learning curve for her as well as me. With Meryl, at Yale, her nickname on the faculty was “The Ice Queen,” brilliant but cold. I believe I was the first one to almost make her cry!

KB: Inspector Cramer in the show Nero Wolfe with William Conrad and Lee Horsley: How did you get this role? I love this show. Shame it was only 1 season.

I practiced getting in and out of many chairs without using my arms, then went to the audition, and got the part.

KB: You have been in so many great theatre plays. Do you have a favorite and why?

It was “Are You Now or Have You Ever Been…?” The play was actual testimony from the House Un-American Committee investigating the infiltration of Communism into show business in the 1950’s, edited by Eric Bentley. It was a dynamic and provocative play, and I had a great role in it as Abe Burrows in its premiere at Yale Repertory. I went on to perform in it Off-Broadway in New York City, and then produced it, as well as acted in it in Los Angeles in multiple productions and revivals, as well as at the Ford Theatre in Washington, D.C. It launched my career in LA.

KB: If you could direct a movie and choose three actors to star: Who would you pick and why?

Viola Davis, Jessica Chastain, and Marc Rylance. They are all daring and committed actors who also, I have heard, have wonderful senses of humor.

KB: What advice would you give to aspiring actors, actresses, directors and writers? What are the do’s and the don’ts?

Learn your craft, and always remember to bring behavior into your readings and auditions. I’ve written a book, A Passion For Acting, that shares what I’ve learned as a practitioner and teacher over the years, as well as a DVD on Auditioning. I began teaching a free Zoom acting class during the pandemic that’s still going on Wednesdays, from 11 to 1 PT, my time in Los Angeles. There are close to 200 participants from all over the world. People can sign up to receive the weekly email Zoom link at my website HERE.

KB: You starred in so many tv shows as a guest. Almost every show on tv. Do you have a favorite and why?

Barney Miller. I did four of them, and it was like rehearsing a play every time. With a terrific cast and guest stars, and a hurried rehearsal schedule we would start at the beginning of the script, and only rehearse the first scene until it felt ready. Then it would be shown to the entire cast AND crew, and everyone was encouraged to comment. Invaluable comments from everyone. Some days rehearsals and shooting went on till 3 AM, but I loved it.

KB: You wrote the play The Fox which is basically a must in theatres everywhere now. It was performed everywhere. How does that make you feel? Were you expecting this?

When I became a member of The Actor’s Studio in my 20s, I began looking for material to act that was not Chekov or Arthur Miller or Tennessee Williams, so I began to re-read short stories I liked a lot. One was the D.H. Lawrence’s novella, The Fox. Great material for a young actor from Brooklyn, so I began adapting it. And it just kept going to become the play. From the day I finished the script to the day it became a production, I never changed more than a dozen lines! We produced the original production decades after I finished writing it at the Back Alley Theatre in LA, which I created and ran with my wife Laura Zucker for ten years. Of course, I was way too old to play the part I had envisioned by then, so I directed it. The Fox went on to an Off Broadway run at the Roundabout Theatre that I also directed and has been produced, as you mention, all over the world.

KB: You are 93 and still acting: What is your secret?

I actually stopped acting just last year. I don’t want to be beholden to anyone else’s schedule. I walk when I want to, I sleep when I’m tired, and I work in my garden whenever I like. Fortunately, over 60 years of acting I’ve earned enough not to worry financially. And for now, except for teaching my free Zoom acting class, that’s it. Thank you!

"A man you can bait with a tweet is not a man we can trust with nuclear weapons." —Hillary