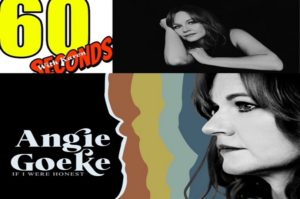 Angie Goeke is an artist, storyteller, teacher, and mother of four children. Her debut album “If I Were Honest” was released in April and received great reviews. She has such a great voice. Check her out Live!

KB: Your dad being a church organist and choir director and you singing in church: Was this a career in the making?

Being exposed to music at such an early age definitely gave me an appreciation and passion for it. I don’t know that every church musician or singer finds themselves chasing a career in it, though! All the other possible career paths that came before me never felt right, like steering a car with a bad misalignment in the tires or trying to ride a bicycle with the chain off its track. I just wasn’t efficient or enjoyable to be around, and I was spending a whole lot of time wobbling as I was trying to make slight adjustments, all the while not even focused on the journey or where I was going. Every time I found myself getting back on the path to write and sing, I knew it was my purpose and joy. The ride, while still having its challenges and adventures, became smoother and more enjoyable.

KB: You are a mother of four: How do you find the time to write songs and make music?

Well, I have to use a combination of intentionality and spontaneity. I have to intentionally plan and set aside time to write when everyone else in the house has plans to be away. It’s easy to fill those moments with laundry or TV or other things, but if I notice that there’s a chance I’ll be home alone, I have to be purposeful in using it to write. Also, there are times when song ideas come, and the rest of the world couldn’t care less about my creative process or timing. So, I have to get creative. I have an app on my phone that I can hum into while I’m driving or waiting in the car to pick one of my kids up. I use it often when inspiration seems to hit at the worst possible times! I have also been known to strum on a ukulele while waiting for the ground meat to brown in the pan for dinner. (One benefit to playing a small instrument.) I wish I could say I have managed my time well, but it’s a constant battle keeping all the wheels on my crazy bus.

KB: You published a novel, worked as a theatre director, taught art at middle school, served as executive director of Not In Our City (a non-profit raising awareness for domestic sex trafficking) and now a singer: What made you choose a career in music? Are you still involved with this great charity?

Creativity has been the thread through all of those endeavors. I have learned that if I am not creating something, I am not the best version of myself. Music really speaks the most to my heart, however. Unfortunately, Not In Our City did not survive the pandemic. Shortly before the shut-down, our board had cast a new vision for raising awareness of trafficking through house concerts. We wanted to use the power of music to disarm and unite, to create a safe environment for real conversations about sex trafficking in the United States. Covid-19 really brought all of that to a staggering halt, and it was hard to recover with a strategy that relied so heavily on public gatherings. I am still a personal advocate and activist on the matter. And would gladly do a house concert on my own to raise awareness if someone wanted to host one!

KB: I love your song “Whiskey in a Teacup! Very bluesy! What is the song about and what inspired you to write it? You have such a great voice!

Thanks! I am naturally a soft-spoken introvert, at least in large groups or new settings. And this song really speaks to the fact that one can be quiet, but full of wisdom and fire. I have often felt underestimated because I don’t walk into a room and demand attention. I wanted to write a song that said all the things that usually just roll around in my brain during those moments. I found a quote by Eleanor Roosevelt: “Women are like teabags. You don’t know how strong they are until they are put in hot water.” And that really hit a chord with all I was feeling and inspired the analogy of strong whiskey in a dainty teacup.

KB: Are there any singers out there you would love to collaborate with or sing a duet with and why?

So many! I love singing tight harmonies and duets. I’m With Her and The Civil Wars come to mind. It would be unreal to sing in an all-girl group with the likes of Aoife O’Donovan, Gillian Welch, or Joy Williams. It would be satisfying to create dynamic vocal cords with any of them! Singing a duet with a strong male vocal that contrasts with mine would also be a blast. Maybe Colter Wall is free?

KB: If you were to make an album with seven of your most favorite songs (not your own), what songs would you pick and why?

Love this question. I’d want to cover a bit from all the genres that have influenced me but give them my own sound that pulls them all into one cohesive work. There’d have to be some Ella Fitzgerald. Perhaps a folk/blues version of “I’ve Got It Bad” and maybe a more Texas swing/Americana-style “Let’s Do It.” In light of the duet question, I’d give anything to record “Fade Into You” by Sam Palladio and Clare Bowen with someone. Plus, I’d love to find some slightly different approaches to some classics with great harmonies: “When I Call Your Name” (Vince Gill) and “You Look So Good in Love” (George Strait). And I’d love to record “Barton Hollow” (The Civil Wars).

KB: Your debut album “If I Were Honest” was released at the end of April. Tell me about it and why should people listen to it?

I really feel like this album is an honest introduction to me. It’s got a love story, heartache, a Momma’s heart, and hopeful dreaming. It’s got complicated emotions, which if you ask my husband is probably 98% of my makeup. Like any first impression, I hope that this album creates countless new relationships with others who are braving this life with plenty of their own doubts and questions, and even more hopes and desires. I couldn’t make it through this world alone, and my offering through this album is that no one should have to. Let’s do it together and work through all the feels and things that are hard to navigate in isolation. Let me join you on the ride home in traffic. Let’s get out of that feeling of exhaustion. Let me join you on the back porch as we contemplate the stars on a hot summer night. Listen because you aren’t alone, and everyone deserves to feel understood.