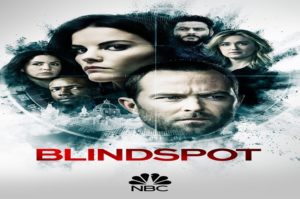 Blindspot had me stuck. Why – I shall explain later. But for the moment here is the genius way in which it began.

Like many crime dramas it started with a Jane Doe.

Except this one was living.

And with the name of an FBI agent tattooed on her back.

And so, began the mystery.

There is quickly established the premise that there is a shadowy organization – like in The Following – to be defeated and many people and mysteries to be solved from the tattoos – like an inked Raymond Reddington figure in physically written format like in The Blacklist.

It’s a heady mix and once we get into the drama and it begins to unfold with twists and turns that sees Jane Doe identified, misidentified, struggle with her identity, with a mystery illness, with a less than savory past, with an attempt to destroy people who have been helping her and then end up married to the man, she conveniently had already tattooed on her, it is a real rollercoaster of drama which works on almost every level.

For me, and where I got stuck, it began to run out of steam towards and in its final fifth season. Having started with an explosive premise which was highly original, the strange became normal and the twists needed to be bigger and more eye catching, leading to leaps of faith that stretched more than a Marvel Multiverse.

Over 100 episodes in those five seasons, the drama created by Martin Gero and networked by NBC kept me watching because it had an exceptional cast to drive it. Running from 2015 to 2020, it continued to keep me loopy throughout but with a tinge of expectation that needed relief from the narratives whilst investing in the characters.

That cast was Sullivan Stapleton as FBI agent Kurt Weller who is the eponymous name tattooed on the back of his future wife and principal focus of the whole damn thing – Remi “Jane Doe” Briggs played by Jaimie Alexander. She is identified as a former childhood friend of Weller’s which is false and part of the conspiracy that this shadowy organization, is playing to infiltrate the state and destroy it.

The organization intent in destroying things is led by Shepherd, played by Michelle Hurd. She has sent in Jane Doe to work from within and it is quickly discovered that Jane Doe who has no memory of anything before being found in the bag in Times Square, is not the childhood friend, she unravels, and her memory starts to return thanks to a drug which she was given before arriving on the scene. As well as beginning to remember she is a baddie, she is also dying. Her story continues to be exposed and we find out that she was an orphan in apartheid South Africa, was drugged into this organization, and it is this drug which begins to kill her until an antidote is found and she is cured and sorted. Both Weller and she try and escape the whole storyline but are dragged back in due to a “brother” Roman played by Luke Mitchell of a conspiracy to finish the work started by their “mother” Shepherd. Both are killed during the resolution and victory by the State.

The team in the FBI behind both of them include FBI agent, Edgar Reade played by Rob Brown who falls for FBI agent Natasha “Tasha” Zapata played by Audrey Esparza, before being killed in a drone strike at the end of season four – that was a cracking finale! There is a high tech, tech team with Patterson, played by Ashley Johnson, an exceptionally gifted analyst and computer geek, who falls for a double agent before recovering herself to be exposed as the daughter of Bill Nye – who appears… as himself! She hooks up professionally with the wonderfully named Rich Dotcom played by Ennis Ermer.

There are a number of supporting characters and always an authority figure or two willing to step in and challenge them. They object to this New York FBI Office having a group fixated on the body of one woman. This is, despite overwhelming evidence that the mystery bound up in her tattoos relate to real crimes with real threats throughout. The jeopardy is always that these figures may actually be part of the conspiracy to destabilize the office, that they may well be the enemy itself and guess what – some of them actually are!

The suspension of disbelief that was necessary at the beginning, but by the end was wearing off. We had bought in to so much and having had so many rollercoaster rides, it was inevitable we would find ourselves not feeling the excitement of a final run at the whole conspiracy premise. I am quite sure that conspiracy theorists will keep the whole series on repeat but by the final run, I wanted more but was feeling it might just be a conspiracy angle too far.

I struggled to finish it. I still wanted to just go back and solve the mysteries on the tattoos. It is a struggle to stretch things out at times. Another TV show I mentioned above, The Blacklist, have a similar challenge. They have lost a principal character, similar to Weller, being the one a criminal or suspected criminal is asking to see when they appear at the start of the series: The Blacklist have lost Liz. Will it lead to new mystery based on the mystery of her family or will it flop because the whole premise is questioned?

Blindspot lost its way because they defeated Shepherd and needed to develop a different version of the same conspiracy – hell knows, there are plenty from which to choose – but it didn’t have the same urgency for me as the connections within the group in their places of work was what made it work best. When they end up being fugitives for a time it does not push the narrative the way it needed to but asked once more for a bigger leap and I was struggling to follow.

As a whole, it still holds up though and that is why I may go back and revisit season five – just to check…