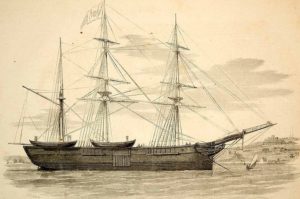 I bear the scars of all my years.

I am stained with ink.

Quill pens and inkwells have been among my decorations.

I bear scuff marks left by some important men who will be long remembered by Clio, the Greek muse who is the patron of history.

My parentage was from an Arctic discovery ship by the name of HMS Resolute. And my parental unit bravely travelled through perilous ice laden waters.

When mother was young, on April 28, 1854, she became trapped in the treacherous icy waters of the Arctic. Her crew was forced to abandon her. She remained stranded, alone and cold.

She was lost, and continued to drift aimlessly through the ice.

Besides being brave, my parent was fortunate. It was in 1855 that a whaling vessel called the George Henry found her floating in Davis Strait.

The George Henry had come from New London, Connecticut. When they were several hundred miles west of Greenland, the crew sighted a large vessel. As they watched the ship, it appeared to be abandoned; yet it continued to draw nearer to the George Henry. Some crew members commented that the ship looked to be under full sail and was making its way toward them.

My mother continued to be amazing as she had somehow managed to travel twelve hundred miles from where she had been abandoned.

The Resolute was rescued and brought to the United States for repairs. As an expression of good will, the ship was then returned to England.

In her later years, she proudly served in the Royal Navy until she finally retired in 1879.

It was in 1880 that I came into being. Queen Victoria was considering a gift to the people of the United States and to the President, Rutherford B. Hayes. And it came to pass that I was created from the magnificent oak timber of my mother vessel. The Queen presented me as a token of friendship and good will between the people of Great Britain and the United States.

I am stalwart and elegant and I weigh thirteen hundred pounds.

Yes, I am old, almost one hundred and fifty years have passed since first I emigrated from England to your shores; and I am scarred; yet I proudly stand on my double pedestal.

I live in the Oval office of the White House.

I am the Resolute Desk