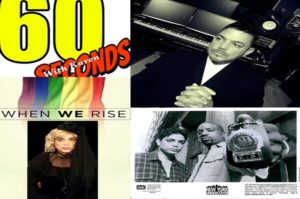 Michael is an actor and dancer known for the TV Series “Fame”, Michael Jackson’s video “Beat It” and the TV show “New York Undercover”. He performed with ballet legends Rudolph Nureyev and Mikhail Baryshnikov and played the lead in “When We Rise” which was based on Cleve Jones’s book.

KB: Most people will remember you as dancer Michael in the TV show Fame. How did you get this role?

How I got Fame, the television series, is a little bit complicated but I’ll try to make it simple. I had already done Fame, the movie, and while I was filming it, I auditioned for the Broadway revival of West Side Story. Because I got West Side Story and had already started rehearsals for it by the time Fame, the movie, was shooting the finale scene, I could not be in the finale, which I was very unhappy about.

Fast forward a year, Fame, the movie, had come out and was a huge hit. I’m still doing West Side Story on Broadway and the producers of Fame decided they still wanted me to do the pilot for the TV series even though I had not finished the original movie; I guess I had the right qualities they wanted…

KB: The school Fame is based on is the High School of Performing Arts in Manhattan. You actually went to this school?

I did actually attend the real High School of Performing Arts in Manhattan and had a blast. My first day was an eye opener; it was full of these amazing colorful, outrageous, and inspiring personalities. I was there for almost two years and then I was tapped to go tour with a ballet company, ballet being my first love, and had to drop out of school and get into a professional children school so I could work.

KB: You danced with Rudolph Nureyev and Mikhail Baryshnikov in ballet performances: How was it to dance with these 2 Legends?

These were early experiences that told me I was in the right place. I was one of four boys, we were nine and ten years old, and we were going to be the pages for Sleeping Beauty, the ballet; Rudolph Nureyev was staging this version for the Royal Canadian Ballet Company at the Metropolitan Opera House at Lincoln Center. It was mesmerizingly grand. The Tchaikovsky score, the costumes, everything…it was truly a spectacle, especially for a kid from The Bronx. My experience with Mikhail Baryshnikov was just as enlightening. It was with the American Ballet Theater, which, at the time, was my favorite ballet company and where I really wanted to dance. I was about fourteen years old; the ballet was called La Fille Mal Gardée. It was a short ballet, and I was in a small section of it but I was so lucky because I got to watch the greatness of Misha up close…so many great performances.

KB: You performed in Michael Jackson’s video Beat It: How did you get this part and how was it to work with Michael?

Working with Michael Jackson on Beat It was amazing. I have to say, I owe it all to the late, great, talented choreographer / director Michael Peters. My life is really a series of happy chances, chance meetings, chance moments and chance accidents! I did a showcase dance concert for another choreographer, Otis Salid, and it was a magical night; there were many celebrities and VIPs in attendance. I danced really well that night and was super happy because you never know who’s going to be in the audience. Michael Peters was in the audience, and he became an incredible mentor to me from that night on. He was the choreographer, with Michael Jackson, of Beat It and he brought me on to dance in the video. I was very lucky throughout my career to have people like him help and guide me through the ups and downs.

KB: You played Santiago in Rob Reiner’s A Few Good Men: Did you actually get a chance to meet with Tom Cruise and Jack Nicholson as your role got killed early in the movie?

First off, A Few Good Men is a brilliant movie from top to bottom and Rob Reiner’s direction is impeccable. But more importantly, Rob Reiner’s just a great human being…super kind. Rob held a table read of the screenplay (a table read is when the entire cast shows up and reads the script from top to bottom as if it were a play) and the entire cast showed up, which rarely ever happens, especially with such giant stars. Tom Cruise Jack Nicholson Demi Moore, Kevin Bacon, Kevin Pollock, Cuba Gooding Jr., Kiefer Sutherland… I could go on and on and then, of course, and I’m gonna whisper this, Michael DeLorenzo…so yes, I got to meet everyone.

KB: In 1994 you played one of the leads in Dick Wolfe’s TV show New York Undercover. It was the first time that 2 people, the other actor was Malik Yoba, of color played leads in a police drama series and you won the ALMA Award in 1996 and 1998 : How did you get this part and why do you think it took up to 1994 to have a nonwhite person in a cop show on TV?

New York Undercover was the first TV drama series with the leads being Black and Latino that was ever picked up to series. How I got the show was a very long process, First, they did not want to see me for the role because the casting directors just saw me as a dancer; they didn’t think that I could be this tough New York detective. My agents at the time thought I was perfect for the role, but they couldn’t get me in. Finally, after much begging and pleading I got to read with the assistant to the casting director. If she liked me then I could read for the main casting director and if she liked me then I could read for the producers. I guess I changed all their minds!

KB: You played Jose Sarria, a political LGBT activist in ” When We Rise ” based on Cleve Jones’s book and directed by Gus Van Sant: How did you get this role and how difficult or easy was it to play this part?

I really didn’t know much about Jose Sarria at the time of the audition but when I got the script, his character just spoke to me. Gus Van Sant is another great director that I was fortunate to work with and he had an incredible team. Dustin Lance Black wrote a wonderful script and in Bruce Cohen he had one of the best producers you could ever have.

If you want to make something great, surround yourself with great talented people. I auditioned and they thought I was the one to play the role. I did my research and learned as much about Sarria as I could; he had so much courage and heart. I really loved playing such an interesting character and the bravery of his story still resonates today.

KB: You are also a director, musician, and singer? Do you have anything new planned in movies and music? Anybody you admire you would like to work with in these fields?

I am a director, musician, singer, and a writer as well. I’ve been working on a few things… well many things actually… I have two series that I am developing, one called “Gotham City Boyz” which is about the genesis of a Latin pop star. Another series I’m developing is about a pair of half-brothers fighting for control over a boxing phenom called “Below The Belt”. Both of these shows will feature a culturally diverse cast. My goal is always to provide opportunities where there are historically few. Musically I’m working on my second album/CD download/whatever we are calling it these days and it’s going to be amazing. And I would be remiss if I didn’t give credit where credit is due which is to my parents Arthur and Carmen De Lorenzo because they provided not only a home with warmth, laughter, and love but they instilled in us, and everyone they met who needed a little inspiration, a curiosity for learning and for life.