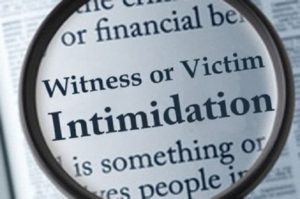 I may have been the only person to see the irony of Liz Cheney pointing out witness intimidation when she or any Republicans said absolutely nothing; that I am aware of, when Trump, and the Republicans that were in office, and their maga followers tried intimidating every witness or potential witness during the first impeachment. He also retaliated against witnesses once the trial was over for giving their testimony. That is also a felony offense that no one bothered to bring up because he was president and untouchable; but now that he has left office, they say that was so long ago let it go.

During the Mueller investigation, Trump intimidated Sessions on a daily basis. In public, on twitter for the entire world to see. Sessions was not Trump’s only target, and Barr was not the only replacement for someone who did not give him his way. Liz Cheney was an example of Trump punishing someone for not being in his corner. It also shows everyone what happens if you don’t give him what he wants. Through it all there were no Republicans calling for witness tampering. Michael Cohen was the one who spoke up when Matt Gaetz tweeted a threat at him and then showed up at the hearing when he had no business being there. Witness tampering on live tv with no consequences. They said the ethics committee was taking a look at his actions but that’s Congress judging itself. Nothing happened to him.

Now here we are on another world stage. This time there are implications that the DOJ may pick the ball up where the January 6th committee ends. It’s my opinion that because it is a Republican calling out a Republican it’s viewed as a crime. In the past Trump teamed up with the Republicans and they would defend it by calling it political banter. They also quote freedom of speech of the First Amendment. They were all BS excuses. Now he doesn’t have that excuse. This time history sees a couple of Republicans with Democrats leading the charge coming after Republicans.

Liz Cheney put the former president and others on notice. Why put him on notice? He could be tried now for witness tampering. For the past assaults as well as the current ones. No man should get away with intimidating witnesses. Roger Stone was convicted of witness tampering for Trump’s behalf. Trump got him off the hook with a pardon for protecting him. Now there are no pardons. There is no presidential immunity. Go for every single person that felt above the law and broke the law in plain sight.

I really do hope the justice system would quit playing politics. Stop being afraid because he was a president of America. The reason he keeps doing whatever he wants is because he feels protected by the system. Witness tampering is not hard to prove. Especially when you have the person doing it in public. Even when it does not work it is still witness tampering. When he tried to push Kemp and others to break the law for him on twitter that was against the law. That alone you could indict him in two shakes of a lamb’s tail.
It’s time to stop protecting institutions for the sake of our democracy.