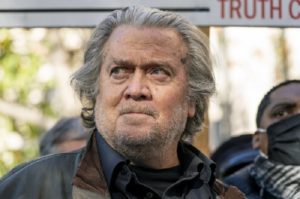 Donald Trump’s former White House strategist and close ally has suddenly had a change of heart. Steve Bannon, a proud racist and treasonous piece of shit, has decided that he is now ready to appear in front of the Jan. 6th House Committee. Bannon initially refused to testify and is currently facing criminal charges after he defied the congressional subpoena over the Capitol riot in 2021.

Bannon’s attorney provided the committee with a letter on Saturday which conveyed his new tune. It comes days before the committee plans to air their most incriminating revelations this week against Trump and his co-conspirators in what might be the final set of hearings. Rep. Zoe Lofgren (D-CA) said, “I expect that we will be hearing from him and there are many questions that we have for him.” Bannon is expected to give his sworn testimony in a private interview, per AP News.

Previously, Bannon argued that his testimony is protected by Trump’s executive privilege claims. The committee and the courts have found these claims to be dubious as Bannon was fired from the White House in 2017; therefore, he was operating as a private citizen and consultant to the president in the months leading up to the Jan. 6th attack. He had been one of the “highest-profile, Trump-allied holdouts” that led to two criminal counts of contempt of Congress after refusing the subpoenas last year.