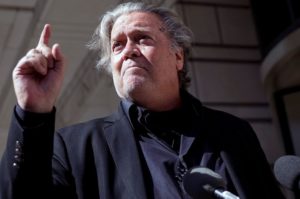 Bannon thought he’d throw a monkey wrench into things by claiming Trump would waive his executive privilege to give Bannon the ability to speak at the January 6th committee. His trial begins next week. Maybe he thought by saying that the trial would be halted and the January 6th committee would open their doors and throw out the red carpet because they have been dying to hear his testimony. NOT!!!

The DOJ in a late-night filing called Bannon out for trying to make an eleventh-hour reprieve. They also dropped a bombshell and told us through their filing that one of Trump lawyers has been in to talk to them. The Trump lawyer, Justin Clark, informed them that Trump never invoked executive privilege for Steve Bannon’s case. Also, to note even if Trump had a change of heart or if Steve Bannon has had a change of heart the crime that took place happened last year. As Elie Honig on CNN put it “Even if Steve Bannon were to walk in there today and to testify about everything, it does not make the criminal charges go away. The crime was committed back in October when he defied the committee. You can’t walk the jewelry back into the jewelry store that you just robbed and say here you go I am returning it, I’d like to undo the charges. These charges shall proceed.”

I for one am tickled to see Steve Bannon trying to squirm his way out of this trial when he talked a whole lot of hot shit when he got out of jail and was in front of media cameras. He proclaimed “This is going to be the misdemeanor from hell for Merrick Garland, Nancy Pelosi, and Joe Biden.” We’re tired of playing defense, we’re going on the offense… You should understand, Nancy Pelosi is taking on Donald Trump and Steve Bannon—she ought to ask Hillary Clinton how that turned out for them. They took on the wrong guy.” I can not wait to hear what he has to say on the day of his trial. As of now he looks like a weakling hoping a letter from his daddy will get him out of gym class. No Steve yo daddy can’t help you. Maybe he helped put you in this position but he is in no position to get you out of it. Yes, I am laughing at you.

July 14th is right around the corner.