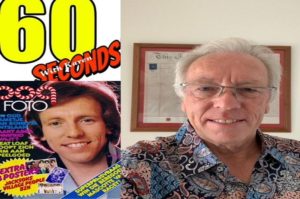 Many of us still remember the band Racey who had a couple huge hits all over Europe in the late 1970s: “Lay Your Love On Me” and “Some Girls”. More than 40 years later the songs are still beloved.

KB: Racey was founded in 1976 in Somerset, UK. Who came up with the band’s name? What is the story behind it?

The Name `Racey` was our record producer, Mickey Most’s choice. The band’s previous non-famous name was `Alive and Kicking` and after numerous suggestions, including the name (The blue band) Mickie finally decided on the name `Racey`. Stating that it would be a more memorable, short, and identifiable name.

KB: The best-known song is “Lay Your Love On Me”: Who wrote that song and were you surprised it was such a big hit all over Europe in 1978/1979?

`Lay Your Love On Me` was a Mike Chapman and Nicky Chinn composition and yes, I was completely surprised at the success of this song. It was presented to us in a very raw state, and we did a lot of work on getting it absolutely right for that 70s feel. I think the crazy dance routine was certainly a contributing factor to its success. It went on to sell over five million singles worldwide. So, we must have got something right!

KB: Some Girls was another great hit, your biggest hit, which Barry Manilow recorded later as well: What is the story behind this song?

`Some Girls’ was of course our follow-up and was an excellent pop song and by far, of course, the biggest Racey hit… The demo` of this song was presented to us in a similar basic state as `Lay Your Love On Me`, just Mike Chapman on acoustic guitar, so once again the work and input by the producer `Mickie Most` and `Racey` had to be done to create the magic that turned this song into a massive worldwide hit! In reply to your question about who the `Some Girls` were!!! of course is All Girls!!!!… Some do!… Some don’t! `Some Girls` went on to sell over 7 million copies worldwide, outselling our previous hit and only held off the #1 slot in the UK, by a load of rabbits!! That was the huge hit `Bright Eyes` but of course `Some Girls` made it to #1 in numerous other countries and was a contributing factor in our Triple Platinum-selling album `Smash-N-Grab`

KB: You have written songs for other artists? What artists and which songs?

Your question regarding who I have written songs for is as follows. `Hot Chocolate` “I Gave You My Heart” `Suzi Quatro` “Tonight I Could Fall In Love”, `Smokie` “The Book”, `Kandidate` “Loving You”, `The Buzz Kills`, “Liar” and for interest, my Daughter Nathalie sang and performed this single “Liar” (Check it out on YouTube!) I have also Co-composed with my son Matt Gower, Dan Priest and (King Willy master mixer) William Bowden, the `2021 Australian Number #1 independent label single “Light A Candle” performed by `Tim Gambles` my son Matthew, daughter Nathalie and several other brilliant Australian singers. I also composed all of `Racey`s in-house penned songs/compositions, single and album material. I still compose and constantly search for that next hit….so hopefully maybe another hit in the future. I must say though, that my current writing style is very different from the Racey hits. I suppose that happens with maturity and the way music styles and productions change.

KB: Are there any current artists you would like to collaborate with and why?

As I have said, I’m someone who still likes to look for that `Lost Chord`. In answer to your question of who I would like to write-collaborate with, I guess would be artists like Van Morrison, Brian Wilson (Beach Boys) Don Henley (Eagles) and why?… I guess it’s writers from that era of music that I still have strong empathy and musical love for.

KB: Are you still touring with Racey? Do you have anything new in the making?

Re-touring…I don’t really tour as such, but I am however frequently persuaded to do the odd performance on TV or other. I do this and I guess it’s because the Racey fans who bought those records and the memories that those fans still have and hold with those songs still linger in their lives…They (fans) know exactly where they were and what they were doing at the time those songs were hit records. So, it makes me feel good to be able to give those loyal fans some nostalgic memories. It’s also an opportunity for me to say, thank you, to them for all my past Racey success. The Melbourne video on my YouTube Channel will give fans still wishing to see me in a concert a glimpse of what currently is! As for your question is there anything new in the making, I now have my own Record-Publishing label called `Jam Mountain Music`.

We recently had the #1 Christmas hit in Australia with a song I collaborated in writing with my son Matthew Gower, Dan Priest, and William (Master mixer) Bowden, called “Light A Candle” Sung by Tim Gambles and various other talented artists, including my son Matthew and daughter Nathalie yet again!… See if you can recognise them in the video on YouTube?!! All profits from this Number #1 single went to a charitable organization called `Act for Kids`. Providing life-changing trauma therapy to Australian children impacted by neglect, sexual, physical, and emotional abuse.

KB: If you were to make an album with your 7 favorite songs (not your own): Which songs would you pick and why?