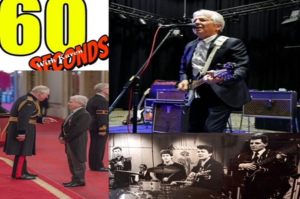 Mike Pender is one of the two last surviving members of the great 60s band The Searchers who had big hits with “Needles And Pins”, “Sweets For My Sweets” and “Don’t Throw Your Love Away”. Mike left the band in 1985 and continued as Mike Pender’s Searchers. Go check him out during the Sensational Sixties Experience in theatres across The UK from October – December!

KB: You are the last surviving member of The Searchers? When did you founded the band and who came up with the name?

As far as I know, there are still two surviving members of The Original Searchers Myself, and John McNally. In 1957 after going to see the Western Movie “The Searchers “ I suggested we call ourselves after the movie which maybe at the time sounded a bit corny! But on reflection today, I think it was a great name.

KB: Liverpool is a haven for great bands: The Beatles, your band, The Swinging Blue Jeans: I wonder why that is? Any explanation?

People often ask why was Merseyside the centre of attraction producing pop groups when London, Manchester and the Northeast also were doing the same! Well I’m sure the Beatles had something to do with it and maybe as some people say, Liverpool with so many pubs and cellar venues had more access to American music probably because Liverpool at that time was the gateway in, and out to the United States. My own theory however is the arrival of Buddy Holly and The Crickets in 1958 which was about the time myself and many other teenagers in Liverpool were starting to get together with their pals learning to play guitars and sing Buddy Holly songs! The date was 20th March 1958, I sat in the stalls at the Liverpool Philharmonic Theatre to watch my idol and I was inspired!! As was everyone at that time in Liverpool Fender Strat’ and unique vocals! Every up and coming group wanted to be Buddy and The Crickets and Buddy, more than any other artist at that time, was the inspiration for most if not all the Liverpool groups.

KB: You are the guitarist: Did you always wanted to be a guitar player? What age did you start?

I only ever wanted to be the guitarist in the band, playing instrumentals at first and then playing and singing just like Holly but eventually, as time went by and after lead vocalists came and went I was presented with the job by Tony Hatch, the Recording producer at Pye Records, and so I became the lead vocalist and guitarist.

KB: Most hits were written by other people: Did The Searchers write any songs themselves?

We as the Searchers in those early years and unlike the Beatles, didn’t write songs and much preferred to sing along with our favorite Rock Stars getting as near as we could to their creativity. We all had our moments though when we realized the rewards from writing songs were much healthier for your bank balance than just singing other people’s songs. The bands only chart success was “He’s Got No Love” written by Chris Curtis and myself.

KB: You sang the lead on Needles and Pins and Don’t throw your love away: Great voice! Great hits! Were you surprised ?

Was I surprised? Yes I suppose I was but at the same time quietly confident!

KB: If you could make an album with your 7 most favorite songs (Not by The Searchers): Which songs would you pick and why?

This question takes a bit of thinking about it and I don’t have the time to talk about seven songs so I’ll just mention the titles:

Eagles – Take It To The Limit
Eagles – Hotel California: Just for the guitar solo!
Brian Adams – Summer Of 69
Michael Bolton – How Am I Suppose To Live Without You
Gloria Estefan – Anything For You
Kris Kristofferson – Sunday Morning Coming Down
Rita McNeil – Working Man

KB: You are currently on tour? Are you doing any festivals this year?

There are no Festivals scheduled not because I won’t do them! but I’ve not been asked. There are three concerts in Denmark the end of July and then back with Sensational Sixties Experience in October until December. I will take a six month break next year and then think about a Farewell Tour.