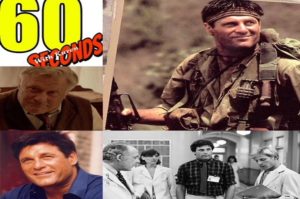 Terence Knox is a familiar face on TV: He played Dr Peter White in the TV shows “St. Elsewhere” and Sergeant Zeke Anderson in “Tour of Duty”. He lives in Washington State where he appears on stage every year in several plays.

KB: Did you always want to be an actor when you grew up?

Nope. Growing up, never thought about pursuing acting as a career. It wasn’t until well after college.

KB: You played Dr Peter White in St. Elsewhere for 3 seasons: How did you get the part and what appealed you to the role?

St. Elsewhere was really one of my very first jobs, so of course that in itself was enough to make it appealing to me. It wasn’t until we actually started filming that I realized just how lucky I was.

KB: You played Sergeant Zeke Anderson in Tour of Duty for 3 seasons: How did you get this part and how hard was it to make it look authentic as if you were really in Vietnam?

It was hard to get the job, because it was a great role and there were a lot of other fellas after it. I remember having to audition several different times before different groups of producers. Then before the network folks. It was hard making it believable, because it involved jungle war scenes and we were filming in Hawaii and Los Angeles. We all had to take ourselves very seriously in order to pull it off. And we did. Of course, our physical circumstances weren’t even comparable to what the real soldiers endured, but having said that, we at least went about the job with serious intent.

For three years and with relatively few frills, as those things go. We were never really a hit show, so none of us was ever making the big bucks. Nobody was a star. We were just working actors doing a pretty damn good job on a tough subject. Nobody anywhere at that time was rooting for that show to succeed, and nobody gave us much of a chance. Hell, the network put us up against The Cosby Show.

KB: You are on stage every year in your hometown in Washington State? What plays?

“Inherit The Wind,” “Frost/Nixon,” “And The Winner Is…,” and “Ordinary People,” among others.

KB: Are there any actors/actresses/directors you would love to work with?

Ah hell, at this point in my career there are very few wishes and dreams that would get me to pack up and leave home. I like my life, I like my lady friend Cindy, and I like my dog. I’ve worked with some wonderful people, and in some great places. I’m a lucky guy. If I’m not, I don’t want to know about it.

KB: What are you currently doing? Any new movies?

Last Thanksgiving, I finished a WWII movie about a German Pow camp in Algona, Iowa. True story. The prisoners saved the corn harvest for the locals one year. They also built a nativity scene that still stands as a kind of war museum there in the town. “Silent Night In Algona”