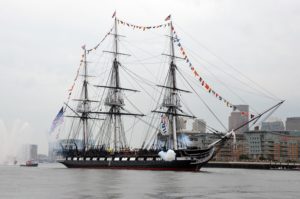 She is indeed proud to serve.

And if you read this column no further, I am sure that she wants you to know and remember that she is the oldest naval vessel still commissioned that has sunk an enemy ship.

She is affectionately known as “Old Ironsides.”

Her official name is The USS Constitution.

Her construction began in 1794 at Hart’s shipyard in Boston.

Although her hull is primarily composed of white oak, she has copper sheeting. Most of the brass fittings on the ship were forged by Paul Revere himself.

There was no iron attached to her sides. It appeared as if cannonballs flung at her were unable to penetrate through her very strong oaken hull.

It was a young law student in 1830 who wrote a poem about the USS Constitution. The poem became widely reprinted in many newspapers and was called “Old Ironsides”

After the War for Independence, she was called back to service during the Civil War. “Old ironsides” became a training ship for cadets and she also provided their living quarters.

One hundred and sixteen years after her last sail “Old ironsides” sailed again in1997. She did this under her own power. There were no riggings and no tethers. Crowds gathered to watch this great vessel sail around the shores of Massachusetts.

And then in 2012, she set sail in remembrance of the two hundredth victory she had over a British vessel called the Guerrierre.

In 2017, the ship celebrated the two hundred and forty second birthday of the United States Navy and her own two hundred and twentieth birthday by again setting sail. She travelled from the Charlestown Navy Yard in Boston to Fort Independence at Castle Island. On her arrival she presented a twenty one gun salute. And the National Guard at that station returned seventeen volleys of cannon fire in recognition.

This lady is indeed proud to give away her age and proclaim that she is the oldest commissioned ship in the United States Navy.

Here’s to Old Ironsides, the USS Constitution, the oldest naval ship afloat and still an official member of the fleet of the United States Navy!!!