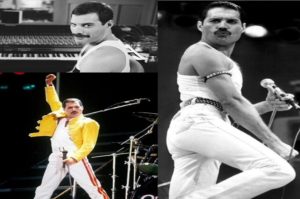 Farrokh Bulsara was born on 5 September 1946 in Zanzibar and moved to London with his parents when he was 18 years old. He met Brian May and Roger Taylor in 1970 and decided to form a band: Queen. Farrokh became Freddie and Bulsara was changed into Mercury: Freddie Mercury. Freddie had the gift that he could play anything on the piano. He listened to a song on the radio and minutes later he hit the piano keys.

Roger Taylor and Freddie sold clothes and scarves in Kensington and Freddie was also a baggage handler at Heathrow Airport. Freddie designed Queen’s logo which has the zodiac signs of all four members: 2 Lions for John Deacon and Roger Taylor (Leo), a crab for Brian May (Cancer) and 2 Fairies for Freddie (Virgo).

He was flamboyant, theatrical, impulsive and knew how to engage with a crowd, no matter what size.

His quotes had the same style:

3. “The most important thing is to live a fabulous life. As long as it’s fabulous I don’t care how long it is.”

4. “I always knew I was a star. And now, the rest of the world seems to agree with me.”

11. “I think my melodies are superior to my lyrics.”

13. “When I’m dead, I want to be remembered as a musician of some worth and substance.”

14. “The reason we’re successful, darling? My overall charisma, of course.”

15. “If I die tomorrow, I will not regret. I really did everything I could.”

16. “The whole point of Queen was to be original.”

17. “When we began, we approached it the way we did because we were not prepared to be out-of-work musicians, ever. We said either take it on as a serious commodity or don’t do it at all.”

19. “The concept of Queen is to be regal and majestic. Glamour is part of us, and we want to be dandy.”

20. “A concert is not a live rendition of our album. It’s a theatrical event.”

21. “I love the fact that I can make people happy, in any form. Even if it’s just an hour of their lives, if I can make them feel lucky or make them feel good, or bring a smile to a sour face, that to me is worthwhile.”

22. “Years ago, I thought up the name Queen. It’s just a name. But it’s regal, obviously, and sounds splendid.”

23. “Money cannot buy happiness, but it can damn well give it!”

24. “Oh, I was not made for heaven. No, I don’t want to go to heaven. Hell is much better. Think of all the interesting people you’re going to meet down there.”

25. “My soul has painted like the wings of butterflies,

Fairy tales of yesterday will grow but never die,

Freddie wrote 10 of the 17 songs on the Greatest Hits album by Queen: “Bohemian Rhapsody”, “Seven Seas of Rhye”, “Killer Queen”, “Somebody to Love”, “Good Old-Fashioned Lover Boy”, “We Are the Champions”, “Bicycle Race”, “Don’t Stop Me Now”, “Crazy Little Thing Called Love”, and “Play the Game”.

His performance at Live Aid 1985 is considered one of the greatest in the history of music. Nobody knew how to play a crowd like Freddie.

A statement was released on 23 November 1991 which confirmed Freddie’s illness:

Following the enormous conjecture in the press over the last two weeks, I wish to confirm that I have been tested HIV positive and have AIDS. I felt it correct to keep this information private to date to protect the privacy of those around me. However, the time has come now for my friends and fans around the world to know the truth and I hope that everyone will join with me, my doctors and all those worldwide in the fight against this terrible disease. My privacy has always been very special to me and I am famous for my lack of interviews. Please understand this policy will continue.

A day later, on 24 November, he died at his home in Kensington at the age of 45.

Freddie was one of a kind. There will never be another like him.

Forever in our hearts.