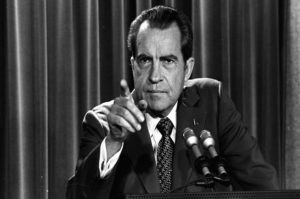 Just about every news story you turn to is comparing what happened January 6th to what happened in Watergate. You will hear them say ‘what did he know and when did he know it’ which is a famous Watergate quote. I’ve also heard them frequently comparing every witness to John Dean. Dean, a White House lawyer, accepted a reduced sentence for his role in the Watergate scandal for his testimony. There is no John Dean in Trump’s attempted coup.

The closest person we have to John Dean is Pat Cipollone, who was a lawyer for the Trump White House. Unlike Watergate there has been no cooperation with law enforcement for his testimony or no plea deals that we are aware of. Also, this is not Watergate. This was an attempted coup in broad daylight by Donald Trump and his MAGA following. If I compared it to any time in history it would be with the Confederation. They decided they were going to subvert the will of the people and put in their own president, Jefferson Davis. The same with the MAGA movement. Instead of a confederate army they used militia groups like The Proud Boys, and The Oath Keepers to name a couple. Like the confederates they were heavily white supremacist groups that ultimately failed.

Some people (“some people” are Republicans who want to make excuses for their party) like to say that the insurrection on January 6th were random outbreaks of people who were angry that the president they wanted to stay in office was having to leave. He convinced them that the presidency was stolen from him and he needed them to help him fight. Turns out, as some of us suspected, it was not spontaneous, it was planned. We found this out during January 6th hearing testimony as well. While the riot was happening some of the political commentators mentioned that Trump’s lawyer warned him not to make the speech because it could leave him in legal jeopardy. This was before he changed the speech to try to intimidate Mike Pence into breaking the law so he could remain president.

Pat Cipollone is the lawyer who is said to have kept warning Trump that what he was doing was a potential crime. His name has been mentioned a number of times as the person telling Trump the danger that he was in. Recently he met with the January 6th committee in a n interview that lasted eight hours. I look forward to what all he had to share.

One of the reasons I point out that this is not Watergate is because Nixon backed down and stepped down to protect the country and to keep from going to jail. Trump is still doing what he can to hold up the lie. Pat Cipollone could be the main reason Donald J Trump goes to jail.
Trump will try and say he did not know what he was doing was illegal. He will say he was sure that he had won and was fighting according to his beliefs. Cipollone can contradict those lies. Nixon was spared jail in Watergate. I don’t believe Trump will be spared jail time.

This is not Watergate. There is no John Dean. There are multiple people that were on the inside who are willing to testify because they want to stand up for America.