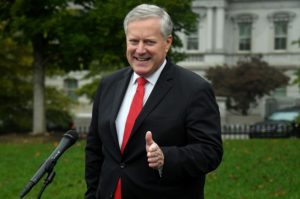 Mark Meadows was a member of the Freedom Caucus while he was a member of Congress. This is the group that housed the racist Tea party that carried the birther movement against Obama. During the Michael Cohen hearing, Cohen accused Trump of being a racist. In an effort to defend Trump’s honor Meadows brought out a black woman that worked for Trump to stand as a prop to prove that Trump was not racist. I remember watching the hearing as it happened and immediately, I saw him as a racist. He cried and declared that Rep Cummings was one of his best friends. For the record, that is also a racist statement as well as propping up a black woman a racist act. Racist people can have black friends.

Watching Joy Reid as she asked Jill Wine- Banks what she makes of Mark Meadows turning from being one of the normal people to one of the conspiracy people. Jill answers “It’s one of the strangest things because I have tried to talk to Trumpers and they don’t have facts. He had the facts. I think he was smart enough to know what was true or propaganda.” She goes on to state she believes Meadows was sucked in the way of one lawyer she knew from Watergate who was on the straight and narrow but could not refuse the president. She stated about Mark Meadows; “The only thing I can think of is that Mark Meadows lost his moral compass and was willing to do whatever he could do to make Donald happy.”

Mark Meadows did not lose his moral compass. It is where it has always been. It’s not like Mark Meadows was Trump’s first Chief of Staff. Matter of fact he was his third after Mick Mulvaney who was also an alum of the Freedom Caucus. Mark Meadows was behind the scenes during the Mueller investigation into Russia collusion and during Trump’s first impeachment. He knew Trump was surrounded by chaos and corruption and he chose to leave his job as a congressman to go work for Trump.

Meadows is where he wants to be. Things may be getting a little hot for him in the kitchen but he hasn’t run out screaming because this was a fire he helped to create. One of Trump’s m.o.’s is to make sure everyone around him is also in as much or more legal jeopardy than he is. He usually uses someone close to him that’s been watching his back, like Michael Cohen, as the scapegoat. Somewhere along the way Meadows may have that role. As for now he is sweating it out with Trump and hoping that since the DOJ declined to indict him on criminal charges of Contempt of Congress, maybe just maybe that same treatment will protect him from seeing jail time.

I hope he spends the rest of his racist life in jail because he got into it all with his eyes wide open.