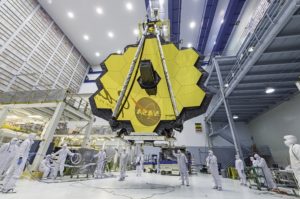 It has been a long time.

It feels like forever since we have had good news that we can celebrate together.

Thanks to you James Webb Space Telescope! We have happy headlines in the media. We have magnificent photos for our eyes to feast upon. We have a great and peaceful achievement for all of us to enjoy.

It was only a few days ago that the most powerful telescope built thus far treated us to detailed photos of the distant universe.

I felt a sense of peace as I gazed at star and galaxy studded photos of our past. Webb has enabled us to view objects that had been previously obscured. It’s an infrared telescope; and since infrared has a longer wavelength than visible light, Webb can poke through dense cosmic clouds. And with infrared, there is less scattering, giving much clearer photos.

This miraculous telescope has equipment that allows us to look at exoplanets. (Planets that are way beyond our own solar system). We are now able to determine the kind of molecules in the atmosphere of these exoplanets. Do they have water? Methane? Carbon dioxide?

We see a sky filled with the beauty of galaxy clusters more than thirteen billion light-years away…the oldest galaxies that we have yet been able to observe in our universe.

There were so many ways in which this mission could fail. There was little margin for error and so much risk involved. The whole project was impossibly complex.

Like all the greatest achievements, JWST (James Webb Space Telescope) was created by a collaboration. More than ten thousand people from The European Space Agency, NASA and the Canadian Space Agency worked together on this brilliant project.

There had to be a project leader. And so, Dr. Thomas Zurbuchen, NASA’s Associate Administrator for the Science Mission Directorate, came to the Chief Engineer at Goddard, Gregory Robinson, and offered him the position. Robinson refused the job.

Mr. Robinson, the son of a sharecropper, who had attended a racially segregated elementary school, was not only an engineer, but had served in policy, planning, training, operations, as well as in design at NASA.

After several refusals, Robinson finally accepted the position as Director of the Webb program and Zurbuchen calls this electrical engineer from Howard University, “the most effective leader of a mission I have ever seen in the history of NASA.”

When Gregory Robinson took over, he found himself in charge of an inefficient operation, where communication between the engineers, scientists, technicians and personnel was broken. He needed all his technical expertise as an engineer, all his leadership abilities, and organizational skills. Not the least important facility that he brought to the table was his interpersonal proficiency as a communicator between diverse groups. He needed to be able to connect and speak the language of the people working at NASA as well as politicians who held the fate of NASA in their hands.

Webb, may you continue to bring us stunning photos, to amaze us and bring us knowledge of our universe.

JWST, you are a joy and allow our whole planet to celebrate together.