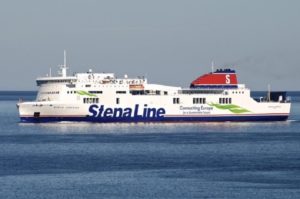 In November 2019 I started a new adventure by moving to Ireland as I was offered a job. I packed up the car, you couldn’t squeeze a mouse in there anymore, and drove to France where I boarded the Stena Line at Cherbourg Harbor. After a journey of 17 hours the ferry docked at Rosslare Harbor in Ireland. I remember watching Brad Pitt in Ad Astra on board in the tiny cinema.
Four months later Covid had the world by its balls for the next 2.5 years and you couldn’t go anywhere. During this time, I worked from home for almost 1.5 years combined and never saw my family and friends in Holland again. This really started to nag me, and I became really depressed.

I decided in early June it was time to move back to Holland after almost 3 years living in Ireland. It was not an easy decision as I really learned to love Ireland, its people, and my workplace. If Covid had not happened, I probably would have stayed in Ireland.

I need to figure out where Leo’s place will be in my car: In front of the passenger seat on the floor. There should be enough space when I move the seat back or on the backseat with one seat for him and one backseat put forward, so I have more space in the boot. I then can put all the suitcases in the front with me. Leo will be strapped in so he cannot do anything to distract me while I’m driving. It is a bit of a puzzle, but I will find a solution.

I acquired so much stuff, it is insane. Mainly clothes. I have a clothing bank station outside my house and will donate all the clothes there that I won’t take with me. I already sold all my furniture and other bits and bobs that I won’t take with me. I have a crazy amount of DVDs that I need to sort out which ones I will keep, and which ones can go to charity shops.
I booked my one-way ferry trip at a JFC price of 344 Euros! and will take the same ferry back to France that I took going to Ireland in 2019. The only difference is that there will be an addition: Leo is coming with me to Holland. He will have his own EU pet passport.

Me on the reclining chair and Leo in a kennel on board of the ferry we will leave Ireland on Saturday 27 August and after a journey of 18 hours we will dock at Cherbourg Harbor in France on Sunday morning 28 August. I have access to Leo at all hours and can take him out for a walk on a designated deck. From there the adventure will really begin because after driving on the left in Ireland for almost 3 years, I have to drive on the right again and let’s hope I will take the first roundabout from the right and not the left otherwise we will have a big problem.

First stop in France will be Auvers-Sur-Oise where Vincent Van Gogh is buried and where you can visit his room where he lived the last months of his life. I already booked my ticket. It has been on my bucket list for a long time and as it is on the way to Holland, why not do it now? I chose a time late in the afternoon as I have Leo in the car, and we probably need to stop frequently as Leo absolutely hates cars and will get all stressed.

From Auvers-Sur-Oise we will drive up North for 1 hour to Peronne where the overnight hotel is booked. After a good sleep we will leave there on Monday morning 29 August and drive to Holland, which is another 8 hours drive in the car, stops not included. Leo will be so happy when we finally reach our destination. We will live with my sister and nephew for the time being, but I intend to find a place for myself very quickly, preferable near the northern coast of Groningen which is the most Northern Province in Holland. I have a few towns in mind so fingers crossed I will find something there.

My sister told me they have a cat, so this will be fun as Leo hates cats. I managed to get a NCT appointment for my car on 1st September to get it back on Dutch license plates. If all goes well, I will have Dutch plates and paperwork within 1 week after that. Always wanted to go to the Kroller Muller museum in Holland as they have a large Vincent Van Gogh collection on display. I will take the opportunity to drive down there as soon as I can. I can start a new job on 13th October with the Dutch Revenue where I worked before. After 10 weeks of training, I will start working in the department that deals with housing and healthcare benefits.

I have no idea if I am making the right decision. Time will tell but for now my heart tells me I have to go where my family and friends are. As my grandmother always told me since I was a kid:

“Follow your heart and see what happens. At least you know you tried if it doesn’t work out”.