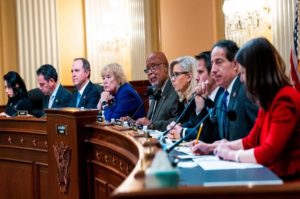 I cannot believe that these MF; Meadows, Cippilone, Pence went along with any of this shit in the first place.

Here’re the things that stood out for me while listening to Pat Cippilone:

• He committed treason by not sounding alarms and informing Nancy Pelosi, Third in Command, of what the President was planning as soon as he knew, given Pence was fucking compromised.

• Therefore, He KNOWINGLY placed Nancy Pelosi in imminent danger. As we now know, they had already planted a pipe bomb where VP-Elect Kamala Harris would be speaking, so knowing that:

• This was well orchestrated.

• Mike Pence knew what the President was planning as well.

• Per his oath, it was his duty to escalate the issue invoking the 25th Amendment BEFORE January 6th, the second Trump asked him to stop counting, which he did many times over. We have the clips, tweets, receipts.

• They ALL failed to protect the sanctity of the office of the President by immobilizing TFG from doing any further damage.

• Any who supported any of this, after having taken oaths promising to protect the constitution and democracy must be charged with treason, first and foremost.

What was shocking for me was that these characters could not work their way out of a plastic bag, and here they were afraid for their lives; yet, not smart enough to sound the alarm to rescue America, or her crowning jewel: Democracy.

What was missing for me was honesty and integrity, because if any one of those stooges had an ounce of honesty or integrity while this was happening, none of this would have happened.

They would have locked the TFG guy …Yeah, former grifter, that’s right. They’d have locked him in the dining room.

They would have taken a video of Trump standing with his lips moving and redubbed it to have him say whatever they wanted to say. “This is a mistake. Go home.”

They would have reached out to the presidents body double and had him say a few words. Where there is a will, there is a way.

They needed to lock Trump back up in the bunker and had someone else take over a long assed time ago.

The GOP clearly fucked themselves and they’re still trying to peddle this maggot infested rotten stench upon the American People as their message of making America Great Again.
Back to J6, Why couldn’t these staffers think beyond the nine dots?

‘The president has flipped his lid. We can’t stand here holding onto our butt cheeks, scrolling through our phones.’

Well, Cassidy Hutchinson said she wanted Mark to care. But …but, nobody thought to go in front of the cameras and say: “Help us. He’s gone overboard.”

If you can’t get this done, you can try to get that done. You continue to try other ways.

If there’s a fire, you’ve got to put it out. If you don’t have water, you look for flour, baking powder, soda, whatever the fuck it is. You use what you’ve got and you GO! Oh, gosh, yes! You go!

They might call it rogue, but you go “MacGyver”, man. You go survival. And not just survival for you, but survival for all of America.

You make it up as you go along the same way that Trump is doing, except you do the opposite. You have to create the antidote to what is happening right there on the spot and calling out the entire escapade in real time, as the bullshit that it is.

“THE SHERIFF IS NEAR”!

The January 6th Failed Coup was almost an instant replay of the movie Blazing Saddles. Trump and his Gang trying to give out badges to mercenários who responded: “We don’t need no stinkin’ badges”, and stormed the Capitol.

Of COURSE it failed, it was endorsed by Trump and the Trump-Karma has him fail at absolutely everything, even with the devils own assistants as his personal army.

WHAT’S HE GOT ON THEM?

I think Trump shows these people his true face and that alone, is so scary, they’re turned to stone.

I’ll leave that there.

This MASSIVE FAILURE, will hopefully lead us to wonderful successes by having We, The People, break off into Lord Of The Flies types of indi groups creating the America they want to live in now that everyone is doing whatever the fuck they want and not abiding by any laws whatsoever. The Experiment Continues.

Let’s see what the Justice Dept does with all this information they are receiving.

Merrick Garland needs to let us know what he’s waiting for and what his plan is. The secrecy bullshit is truly working our collective nerve.

Charge them all. Get them all out.

Everyone out of the pool.

America 2.0 is ready for take off.

What are your thoughts?