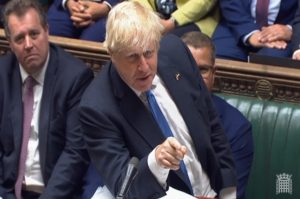 The United Kingdom has a lying, cheating, controversial and scandal hit Prime Minister who has clung onto power like a Third World Dictator with blood on the walls. He is, in essence, a pure scunner.

Johnson won a landslide victory in the General Election of 2019. At that time, he was already a figure of some controversy. He had been fired from a job for making up quotes at The Times and for lying about an affair to his Conservative Party leader. A man of fluid relationship to truth and controversy, within weeks of becoming Prime Minister, he attempted to dispel with parliament – a process called proroguing it. It was ruled illegal in court. To truth and controversy such fluidity was now applied to the law.

He was then investigated over possible historical corruption whilst he was the Mayor of London over his “relationship” with American businesswoman Jennifer Arcuri. It was alleged she had benefitted from access to funding and business trips. It was found there was no “criminal” activity.

He then defended his colleague, Priti Patel, over bullying allegations whilst she was Home Secretary and his own ethics adviser, appointed to ensure the best standards in public life, resigned in disgust at those actions.

He went on to defend his key aide who had broken COVID rules, the rules set by his key aide and Johnson, which led many to question his competence. That self-same aide later left and accused him of trying to get donors to secretly pay for his redecorating of Downing Street for £112,000. It was found that Johnson was “unaware” this was what was going on and when he was informed paid for the refurbishment himself.

He then tried to change ethical rules for politicians when one of his supporters was found guilty of accepting cash against the rules on lobbying. Public anger caused him to completely change his mind and his supporter left his government post.

When it was alleged that there had been parties in the Prime Minister’s working residence, Downing Street, he claimed, in parliament no parties happened, no rules were breached and that he had nothing to be sorry for.

He then became the first Prime Minister in history to be found guilty of breaking the law – set by him and his government – by the police, fined by the police and of the nearly 30 parties found to have been held in 10 Downing Street, he attended many of them, apologizing for each when the truth emerged.

An accusation then surfaced that when Foreign Secretary he had tried to get his new wife a job, before she was his wife. It further emerged that it had been a news story many years ago but pressure apparently had been put on the Times not to publish it as many other scandals from Johnson’s time at the Foreign Office would be exposed.

Just as that was dying down, another ethics adviser resigned, accusing Johnson of trying to breach the code designed for standards for minsters of the crown and of planning to breach international law.

Finally, he claimed he was “unaware” that an MP he had appointed to an important job, who was now accused of “inappropriate conduct” had been accused before of serious sexual assault. It transpired there were witnesses to him being told. He apparently lied.

Following that revelation around 50 people, many of whom who had been his cheerleaders even when he was fully exposed, time and time again, resigned from government. Johnson vowed to carry on until it became clear that even the most blinded by his untruths would no longer support him and so he resigned in a petulant, childish speech that defined his personality.

He is, quite simply, a pure scunner.

And so, we have a peculiar election where one party shall decide who shall be our new Prime Minister until the next election. Of the candidates, it has been noted that all but one are tainted by their government jobs and associations with Boris Johnson. The one who is not in the government is last in the hustings, polls and losing key supporters which makes it look likely he shall be out the race soon.

Some wit on Facebook has suggested that the election is a bit like being in a care home, hearing that Jeffrey Epstein will no longer be visiting but the royal visitor next week shall be Prince Andrew…
Scunners aw…

Scunner means to feel a strong dislike or nausea, often used to describe someone who elicits such strong sentiments as a noun…

Hello @DanRather how about being interviewed with Bad Brad?

Need everyone’s help to see if I can get our beloved .@DanRather to sit with me for a 360 Conversation on The “Bad” Brad Berkwitt Show…

It would be an absolute honor…

I’ve been asked to comment because I worked in Intelligence for decades.

What Trump did with classified material would have had my troops/me locked up!

Republican officials saying “I stand with Trump” are traitors.