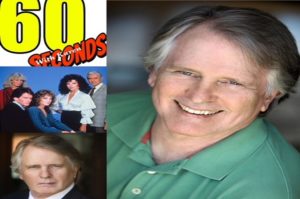 We all know Gordon as Adam Carrington in the long running show Dynasty and as Mason Capwell in Santa Barbara. Currently he is doing a cabaret act with fellow Dynasty actors John James and Jack Coleman called “Cocktails With The Carringtons – A Dynasty Party!”

KB: You are born in Canada. Did you always wanted to be an actor?

I first won a part in “A Midsummer Night’s Dream” at McGill University when I was 18, and that was it; I knew what I was going to be for the rest of my life. It was an incredibly lucky occurrence for me – it left me doubt-free!

KB: You are best known as Adam Carrington in Dynasty which you played from 1982 till the end. How did you get this part?

A.B.C. Television then had a Talent Development department and somehow (I truly do not know how) I became a part of it. This led to various meetings and interviews with different executives, and, finally, to a screen-test with Joan Collins. This went well and I got the job!

KB: When you play a not so nice character for such a long time, what do you do to keep the character interesting?

I was very lucky with Adam: To begin with, I believe one writer was assigned to this character – I don’t know who this writer was but he/she was a talented person and got Adam off to a very intriguing start. After this, he was in the hands of the “Dynasty” writing team. I never found him boring. And I suspect no one else did either!

KB: After Dynasty you starred in Santa Barbara and became the 3rd actor to play Mason Capwell. Was this a difficult task knowing you already had 2 actors before you who played the part?

I had never watched “Santa Barbara,” and I had no preconception of the role of Mason. I have never met Lane Davies, Mason #1, who won an Emmy Award for his performance and who’s reputation was/is terrific. I knew Terry Lester slightly and never saw his Mason. I was thrown into the role and the show very quickly – daytime drama is an incredibly fast operation – and just went to work. I was also in my prime when I played Mason, so the workload of 35 pages per day, five days a week, 50 weeks per year was a schedule I relished. I have never worked so hard in my career. I was also blessed with the best writing I have ever dealt with on camera. Again, great luck!

In fact, I did not “come out.” I was outed, a very different experience. Along with John James and Pamela Bellwood, I was doing some promotional work to introduce the boxed set of “Dynasty” and the first words out of the interviewer’s mouth were “Well, Gordon, as one gay man to another,” and I had one of those lightning-fast chats one sometimes has with oneself. I chose to simply continue the conversation. However, I was and remain angry at this ambush: I was robbed of my autonomy, which very few of us would ever agree to. In fact, the climate in which this happened was a far cry from the social climate in which I had spent my entire life.

There was very little reaction of which I was aware, which doesn’t mean much since I have literally no presence or even interest in social media. You probably have seen more than I ever have, so I leave it to you to explore the reaction further, if you wish! To resume about the social climate in which I grew up: a bit of history on homophobia, Being gay was a crime in Canada until 1968; it was a mental illness in the U.S. until 1973; it was also a condition that was regarded with visceral and ubiquitous opprobrium and loathing. It still is in many parts of this country and globally. As I approached puberty, I of course heard all the epithets applied to gays and I gradually understood that all those ugly words and those ugly voices were talking about me.

The shame was like a menacing thundercloud from which I have only recently escaped. Self-esteem was non-existent for me for decades. If you couple this with my job, and take into account my DNA, which is responsible for how I look, work options were/are limited, I had to keep my sexuality to myself in order to work. During the ’80’s, the era of “Dynasty,” the Aids crisis began and coming out would have been professional suicide, which I was unwilling to commit. I take the attitude of Richard Chamberlain towards coming out. I have never met him, but I agree with what I have read about him. Look him up if you are curious. He is less verbose than I and very clear about the journey he took. Thank you for your congratulations, but I really don’t deserve them. That I am out and pretty happy about it is a result of time and growth.

KB: If you were to play the lead in a movie and you could pick the director and 3 co-stars: Who would you pick and why?

The director would be Sam Mendes. My co-stars would be Judy Davis and Saoirse Ronan. The script would need to be absolutely superb, but since I don’t pay enough attention to current writers, I would need to rely on the people above! (I mean Mendes, Davis, and Ronan, not heaven’s inhabitants!)

KB: What are you doing at the moment? Any new movies, series?

Right now, I am involved in a cabaret act with John James and Jack Coleman called “Cocktails With The Carringtons – A Dynasty Party!”. It consists of our memories of the show and a couple of wonderful new songs written by Jack (lyrics) and Nick Marzock (music) and so far, the response has been gratifying! There is a website under the title, so please have a look! As far as work on camera goes, I have been idle – a few self-tapes now and then, but currently nada. But I live in hope! An actor never truly retires!