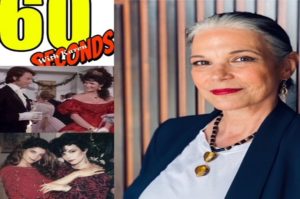 Terri Garber is best known for her roles as Ashton Main in North and South, Leslie Carrington in Dynasty, Suzanne Collier in Santa Barbara and Iris Dumbrowski in As The World Turns. But did you know she is also a businesswoman creating her own soaps?

KB: Did you always want to become an actress?

I started out as a shy girl. My mother thought it would be a great idea if I took an acting class at a children’s theatre. We had to learn a monologue from Romeo and Juliet. I remember it to this day. Thus, an actress was born. I loved it.

KB: You are best known as Ashton Main in the great miniseries North and South. How difficult or how easy was it to play Ashton who is a flirt and evil at the same time?

It was not very difficult playing a so-called “evil” character. You just have to find the humour and humanity in the character. I love playing these kinds of roles. They’re juicy. When you’re playing a “good” character, there are limitations, I feel. When you’re a bad girl, you can do anything because there are no limitations. No one knows how far one could be evil.

KB: Then came Leslie Carrington in Dynasty who is also a flirt and not very nice. You must have gotten the hang of it playing roles like this?

All parts are different. That’s the challenge…making it different.

KB: I read that you also sing?

I used to sing. I was trained as a musical theatre actress, but my career didn’t go that way. Now, I think I croak rather than sing.

KB: Is there a current TV show who you would love to play the Lead role in and why?

I don’t watch a lot of TV so I really couldn’t say.

KB: If you could pick 3 actors you really like, who would you pick?

KB: I read that you and your sister are in the soap business? Tell me a bit more

Yes, we make and sell soap. It’s a pretty intensive process but I love it and always have a great time with my sister.

KB: What are you currently up to?

I have been travelling, spending time with friends and family and focusing on self-care but I am excited for the opportunities that are ahead of me!

. .@CheriJacobus .@Thomas_Capone .@JudyPete .@BadBradRSR OK, there are a lot of folks talking about classified or unclassified, Trump can't take the docs. Unless the UC was CUI or SBU they wouldn't be tracked and the FBI surely would not execute a search warrant for UC docs.