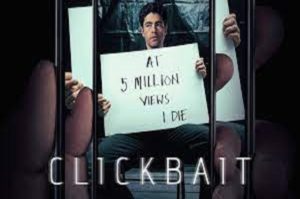 Based on the storyline create by Christian White and Tony Ares. Directed by Brad Anderson, Emma Freeman, Ben Young and Laura Besley.

“Clickbait” is a suspenseful thriller about a wonderful family man who, after going missing from life and work, shows up, beaten, held against his will in an undisclosed location, on a live streaming video holding up a sign claiming that he abuses women with a second sign promising to end his life at 5M views.

The click bait video, proving too enticing for many, is quickly raising his chances of death with every view.

The question remains, is he innocent or guilty?

This cliffhanger takes off like rocket and keeps you engaged till the very end wondering who the character behind the bait truly is.

Wonderful acting all across the board. I gave it a rating of a 7, which for me is almost as thrilling as any TV Crime series, but it’s no “Mind Hunter.”

Rotten Tomatoes gave it a 7.

I gave it an “order Thai, Asian or pizza and give it a view” rating.