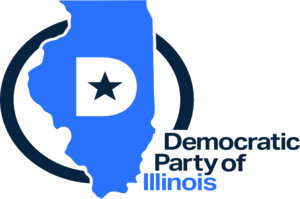 His move to shake up the party’s ranking has Democrats torn between supporting and opposing his choice — especially with US Senator Dick Durbin (D-IL). The battle of the Illinois Democratic Party is one that most of us should be watching; Gov. Pritzker is seeking a re-election bid for his second term this fall, and the winner of the Pritzker vs. The State Democratic Party will determine if the governor has enough influence and power over internal politics as he continues building a national profile for what many anticipate as possible 2024 ambitions.

If you’re wondering how we got to this point, here’s a quick rundown on what’s going on. US Rep. Robin Kelly, who is the first African American and woman to chair the state Democratic Party, is “running to serve a full four-year-term” with the backing of Sen. Dick Durbin, per NBC’s report. Yet Gov. Pritzker and state House Speaker Chris Welch have thrown their support behind a different candidate — state Rep. Lisa Hernandez — and cited Kelly’s fundraising constraints as to why they decided to detour from Durbin’s pick.

Since Rep. Kelly is currently a federal officeholder, she faces different rules regarding fundraising. The problem? Fundraising is the bulk of the party chair’s job. A dual position as a federal official and party chair is rare but not completely unheard of. For example, Rep. Nikema Williams of Georgia holds both positions. Rep. Kelly called Gov. Pritzker’s decision “disappointing” and also stated “no, no and no” when asked if the governor had reached out behind the scenes to let her know his stance.

“I can’t explain why he is doing this,” Kelly said. “You have to ask him.” Meanwhile, one of Pritzker’s campaign team members told reporters that any suggestion that his support for a different candidate comes as a surprise is “disingenuous.”

“Lisa is the one running. It’s not the governor running against Robin,” Pritzker’s aide said. “This is not a personality conflict.” The vote on who will head the state’s Democratic party is scheduled for Saturday.