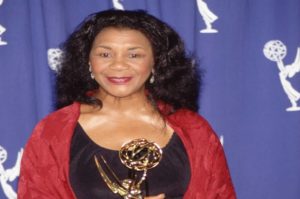 Actress Mary Alice, known for her roles in A DIFFERENT WORLD and SPARKLE, passed away July 27, 2022, at her home in Manhattan. A cause of death was not given. She was 85.
Mary Alice was born Mary Alice Smith on December 3, 1936. She was an American film, television and stage actress. She showed an early ability for acting and began her stage career in her hometown of Indianola, Mississippi.

Mary Alice graduated from Chicago’s Teaching College Mary Alice taught at an elementary school. In the mid-1960s she returned to acting performing in community theatre and appeared in the plays “Days of Absence” and “Happy Endings” and “Fences”, for which she earned Tony Award for Best Featured Actress in a Play.

She made her screen debut in the 1974 film THE EDUCATION of SONNY CARSON. She co-starred in A DIFFERENT WORLD as Leticia “Lettie” Bostic, from the series start in 1987 until the end of the second season in 1989. In the musical drama SPARKLE (1976), she played Effie Williams.

Mary Alice won an Emmy for Outstanding Supporting Actress in a Drama Series for I’ll Fly Away.

Ringside Report sends our condolences to Mary Alice’s family during their time of grief.