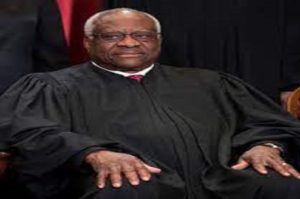 One of the most — if not the most — vile Supreme Court justices are finally starting to cave to public pressure, and it’s absolutely splendid to hear the news of Justice Clarence Thomas leaving his law professor role at George Washington University.

Normally, I would not support bashing one of our top legal scholars; however, time and time again Clarence Thomas (and especially his wife) has proven to be not only unfit to sit on the nation’s highest court, but also as a treasonous troll who is willing to roll back on every case that gave him the opportunity to be where he is. Except for Loving v. Virginia, for obvious reasons of course. It seems that the pressure of protests from George Washington University students after the SCOTUS overturned Roe v. Wade has led Thomas to the only good decision he has made in quite some time. The Justice announced he will not be returning to GWU in the upcoming semester to teach a constitutional law class at its law school this fall. Obviously, why would students want to learn constitutional law from a man who has violated some of the Constitution’s most sacred values? I sure as hell wouldn’t.

Justice Thomas was expected to co-teach the course in the upcoming semester, yet announced that he will no longer be available to do so. He has been teaching the course at GWU, which is located in D.C., since 2011. In a statement to NPR on Thursday, GWU spokesman Joshua Grossman said, “The students were promptly informed of Justice Thomas’ decision by his co-instructor who will continue to offer the seminar this fall.”

According to GWU Provost Christopher Alan Bracdy and law Dean Dayna Bowen Matthew, “we have heard from members of our community who have expressed feelings of deep disagreement with this decision,” the pair wrote in an email to the university community after Thomas voted with the five other conservative justices to overturn Roe v. Wade. Thomas specifically stated that abortion was not a constitutional right. Well here’s a news flash — neither was a black justice but here we are. After the decision the university received numerous calls to terminate Thomas as well as requests to cancel the seminar he teaches.

“Justice Thomas’ views do not represent the views of either the George Washington University or its Law School,” Provost Bracey and Dean Matthew stated. “Additionally, like all faculty members at our university, Justice Thomas has academic freedom and freedom of expression and inquiry.” Although it was clear the faculty and students were not amused with Thomas’s recent actions, they did note that per the school’s academic freedom guidelines which state that the university should not shield students from “ideas and opinions they find unwelcome, disagreeable, or even deeply offensive.”

While the school should not shield students, it’s up to the students who are paying large amounts of money at one of the top private institutions in the country to determine how they want their tuition spent; and Justice Thomas’s ignorant and disgusting views are clearly not worth their money. On a final note, if GWU is in need of a new constitutional law professor there’s an amazing new SCOTUS Justice who is on her way to the bench soon who would be a great replacement. I’m sure Justice Ketanji Brown Jackson would gladly teach students constitutional law that is relevant to modern interpretation and would fill the classroom every semester.