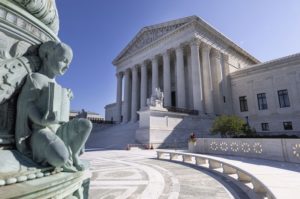 It has come to my attention that the United States Supreme Court has been in the news a great deal of late.

Of course, as a duly registered and certified curmudgeon, I am replete with my own opinions about this court.

Placing my own views to the side (with great difficulty), I began to wonder about how this court came into being.

And so, in order to avoid contention, I will hone my focus into the birth of the Supreme Court.

Back in 1789, Congress passed Article Three of the United States Constitution, thus establishing the Supreme Court. This granted to congress that “the judicial power of the united States shall be vested in one supreme court and in such inferior Courts as the Congress may from time to time ordain and establish.”

This Act was signed by President George Washington who made the specification that the Court would consist of six justices who could serve until they decided to retire or died.

The United States Supreme Court first met on February 2, 1790. At this time, there were no cases to decide. That first session consisted of a discussion of procedures and operation.
It was not until August 3, 1791 when the court handed down their first decision; a debt dispute involving a farmer.

Who was in this first court? The Chief Justice was John Jay and the Associate Justices were Robert Harrison, William Cushing, John Rutledge, John Blair and James Iredell (no women, of course, no men of color, of course)

The justices were nominated by the President of the United

States, then to be confirmed or denied by the United States Senate.

John Jay, the first Chief Justice, was known for five of the Federalist papers. While he was a serving justice on the court, he entered into negotiations with Great Britain. Although formally titled the “Treaty of Amity Commerce and Navigation between His Britannic Majesty and the United States of America,” it became known as the Jay Treaty. Needless to say, he was not a popular man and he left the court when he won a gubernatorial election.

James Wilson was deeply in debt and missed several court sessions as he attempted to avoid collectors hunting him for his bad debts.

John Rutledge eventually committed suicide by leaping from a Charleston Harbor Wharf. (Surely, there are less dramatic ways to resign from the court!)

William Cushing served longer than any of the first six justices. He resigned in 1810 due to ill health.

John Blair was a jurist and close friend of James Madison.

Robert Harrison was unable to serve due to illness and James Iredell replaced him.

A Federalist, James Iredell was considered a very conscientious man and wrote about judicial review. He served on the court until his death.

And so, in order to avoid conflict, anger and being pelted with eggs and tomatoes, I have remained above the fray and merely presented the facts.