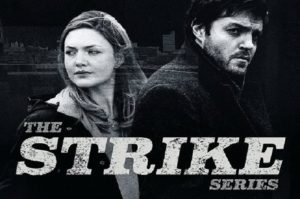 JK Rowling is responsible for a lot of things; making an Edinburgh café famous, making unknown children into child actors, an explosion in reading for our young people who queued round streets for their latest wizardy fix and for a debate on Transgender that rages.

But what happens when you have conquered the children’s fiction world? What do you do next to be taken seriously?

For Rowling, that was to adopt a new nom de plume and write some adult fiction. Instead of a boy with a scar, write about a man who is an amputee. Instead of making solutions out of potions and spells, make them out of reason and deduction and instead of creating a new world, make it the grim reality of a world where a veteran from war returns home to try and survive.

And so, we got Cormoran Strike by Robert Galbraith.

Once the Magic Owl was out the wizard shaped bag and we knew that Galbraith was actually Rowling, it took little time before the BBC decided they could get on board and transfer what we read into what we could see on the screen. Tom Burke was cast as Strike and his love “interest” and soon to be suffering assistant, Robin Ellacott was to be played by Holliday Grainger, who looked for all the world like she would fit into Hogwarts. Having been made in the UK by the BBC, it has been shown in the US on Cinemax/HBO and internationally – hardly surprisingly – by Warner Bros.

We are now fully fed with 4 series, 11 episodes and await series 5 with what feels like bated breath.

The premise is simple.

Strike, the war veteran, is a private eye, operating out of a tiny office in London. He was a former member of the British Military Police, so the leap is hardly huge. Needing someone to tend his office, he takes on Robin. Over the 4 series she goes from the secretary to an investigator – a training he funds for her – which causes issues personally for her as her – eventual – husband disapproves.

Her private life often gets in the way and as an observer it is clear to us all that Strike and Robin ought to be together but like all decent romantically inept private eyes he just does not seem to be able to get his act together. It may be a cliché, but it is a cliché for a reason!

The relationship that has grown between them has gathered some positive reviews and overall, it is a decent fist at a crime-based piece of writing and television. The plots are well structured, the insights, not often telegraphed to the audience and there are genuine moments of jeopardy. All four series and the fifth which is in production, have followed the books written by Rowling. It would be interesting to see if they could survive without her very assured hand upon the tiller – she is an executive producer. They are standard fare and conform to what we expect – a deepening mystery eventually solved by some cleverness.

Is it fair to expect a writer, so responsible for many revolutionary concepts in literature to turn her hand to something so steeped in stereotypes and drag it out and into a new format or formula? Possibly not but what this has shown is that all that Hogwash stuff was no fluke. Rowling is an exceptional writer, and her legacy is surely assured by the effects she has had on generations of children. They may now be wondering about her adult writing because her writing for children as so evolutionary, but she is box office and box office for a reason.

I really liked them and will binge watch series five. I shall however, hope that Robin gets snared by Strike and that they make a success of their partnership as Robin ditches her waster of a husband…