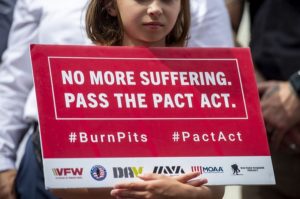 What the hell is wrong with Republicans? We put representatives in office to do the will of the people. Their job is to fight for America. Yet Republicans are doing everything in their power to fight against America and her needs all because they want to stick it to the Democrats.

Republicans have been spending so much time talking about how bad inflation is and how high gas prices are, but the moment the Democrats introduce a bill that will stop price gouging the Republicans vote against it. What surprised me was there was no revolt from their constituents. You are suffering needlessly. WHY? Why vote for people who don’t care about you?

The recent stunt that has me on fire is Republicans voting against Veterans Disability, PACT Act bill, that would expand health care to veterans. They recently voted yes on but changed because they were pissed that their honorary Republican, Joe Manchin, gave a yes on a bill they were against and thought Manchin was too. Originally Manchin signaled he was a no and the Republicans were happy to give Biden a yes on the CHIPS act. After the bill was voted for, Manchin changed his mind and decided he would be a Democrat for a moment and worked with Schumer and Democrats in secret to make it something he would vote for. Angry Republicans took it out on the Veterans PACT Act.

When I say that America needs to pay attention it’s because Republicans are not the only people who vote. We have midterms coming up and there should be no reason we do not come out in full force to vote for Democrats. Republicans are the party of the coup. They are the party that refuses to speak out about how we were attacked by domestic terrorists because it was their leader that incited the entire thing. There are a couple of Republicans fighting the fight but on the whole the party is staying silent hoping we forget about it. WE CAN NOT FORGET!! The January 6th Committee is doing a great job making sure the information is right out front. I appreciate the work they are doing but they cannot be the only ones.

They act like it is a foregone conclusion that the Republicans will win the House. How is that when no one has voted yet? America pay a fucking attention to what they are doing and let’s not let these people who care more about punishing Democrats than they do about protecting America.