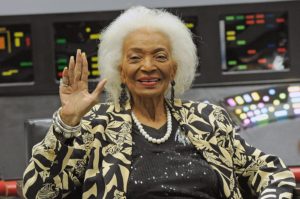 Nichelle Nichols, who played Nyota Uhura, the communications officer on the Starship Enterprise on the iconic TV series STAR TREK passed away of natural causes on July 30, 2022. She was 89.
Nichols was born Grace Dell Nichols on December 28, 1932 in Robbins, Illinois. She was an American actress, singer and dancer. Nichols’s portrayal of Nyota Uhura on STAR TREK was ground-breaking for African American actresses on American television, as she was one of the first Black women featured in a major television series. Nichols appeared in 70 episodes of the series, which ran from 1966-1969. Nichols reprised her role of Uhura in additional STAR TREK films and series such as STAR TREK: THE ANIMATED SERIES (1973-1975), STAR TREK: THE MOTION PICTURE (1979), STAR TREK II: THE WRATH of KHAN (1982), STAR TREK III: THE SEARCH FOR SPOCK (1984), STAR TREK IV: THE VOYAGE HOME (1986), STAR TREK V: THE FINAL FRONTIER (1989) and STAR TREK VI: THE UNDISCOVERED COUNTRY (1991).

Ringside Report sends our condolences to Nichelle Nichols’s family during their time of grief.