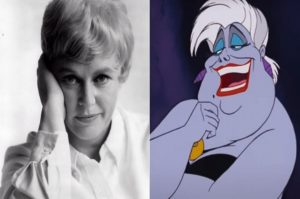 Some voice actors are more identifiable than others. Once you’ve heard them perform in one thing chances are you’re going to recognize them in other things. Emmy winning film and TV actress Pat Caroll certainly fits into that category. Caroll appeared in many films and TV series throughout her career, but she will be best remembered for bringing one of Disney’s most celebrated villains to our screens- Ursula, the sea witch from the 1989 animated classic THE LITTLE MERMAID.

Caroll began acting in 1947, with her first acting credit as Lorelai Crawford in the film HOMETOWN GIRL (1948). She guest starred on THE DANNY THOMAS SHOW (1953-1965), appearing 40 episodes. In the 1965 musical CINDERELLA (1965), she played Prunella, one of the wicked step-sisters of Cinderella ( Lesley Ann Warren).

Ringside Report sends our condolences to Pat Caroll’s family during their time of grief.