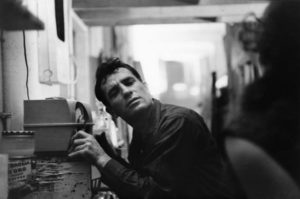 I always felt a connection with Jack. Maybe it is because he died 3 days before I was born in 1969 and one of the first books I ever read was On The Road.

Coincidence? Maybe. I believe it was meant to be for me to discover him at age 12.
Jack was one of those guys: either you loved him, or you hated him. There was no grey area.

Born on 12 March 1922 in Lowell, Massachusetts to French Canadian parents, he spoke French at home and learned English at school.

He studied at Columbia University in New York, where he wrote sports article for the student newspaper while playing football in his freshman year.

A broken leg ended his career and he dropped out of the university. He continued living in New York where he met Allen Ginsberg, Neal Cassady and William S. Burroughs who became part of his life, legacy and books.

Jack wrote his second novel On The Road while living in New York and it was completed in April 1951: a story about his travels across America and Mexico with Neal Cassady as his sidekick who did most of the driving as Jack didn’t have a driver’s license.

He had a special way of supplying his typewriter with paper: taping sheets of paper together till he had a long roll which he fed into the typewriter. This allowed him to type for hours without reloading pages.

Jack’s style of writing is easy, and it doesn’t take you long before you start
visualizing everything as if you are a character in the story. Jack says what he thinks, and he writes what he thinks. He doesn’t beat around the bush. He just throws it all in the open and leaves it up to the reader to deal with it. A few other writers come to mind who are doing the same thing: Charles Bukowski and J.D. Salinger.

Jack would talk for hours about anything that came to his mind and this was the inspiration Allen Ginsberg needed to write his acclaimed Howl.

I was born 3 days later. I believe it was meant to be for me to discover Jack. If I had known him during his time, we would have had a blast. I just know it. I plan to visit his grave in Lowell next year and pay my respects to the man who I call one of my inspirations of becoming a writer and one of my heroes.