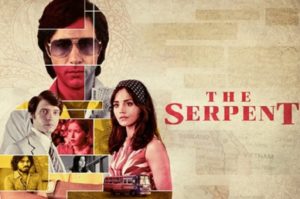 This is an easy one-day binger, excellent in so many ways. Set during the Summers of Love ’60 – ‘70’s. I remember that historical time period and I definitely remember it’s music.

Kudos to Composer, Dominik Scherrer, for capturing the easy going energy of the 60’s – 70’s, I’ll post a link for your listening pleasure at the bottom.

The Serpent is a True Crime Mini-Series under the drama/thriller genre. The movie details factual events of a 1970’s era criminal investigation of a sociopathic conman, thief, serial killer who; robbed and killed young travelers along what was known then as “The Hippie Trail, in South East Asia, stealing their identities, posing as them and traveling to the deceased’s next destination, to cover his tracks.

Charles Sobhral’s crimes reached the world’s heart when parent’s of victims sought to find their children’s whereabouts to no avail given the Killer had the LEO’s in his back pocket. His supposedly amassed wealth aided in covering up his crimes.

Not many during that era, would suspect someone who claimed to be exceedingly wealthy, of committing heinous crimes and killings?

How innocent the world was. Now, we know better. That’s exactly where we start looking first!

The Killer reminded me of TFG. I can be conspiracy minded. I wondered at the films odd timing. I did. If Hollywood remakes The Omen, I’ll know I’m on to something.

By the way, who or what, was present when TFG’s mom was giving birth to that monsoon, I mean, man? Just curious. I digress. Back to the review:

It was not until news of two missing Dutch travelers reached the hero of the story: Henry, a low-level Dutch Embassy Employee with the moral compass of a true humanitarian, that we get to see how complicated the quest to find the missing will be.

Bless this gentleman’s legacy, family and descendants for eternity. The story within the story details how he went above and beyond risking his job, reputation, marriage; sanity, to gather enough evidence to make the case stick. The devils own tale, this was.

The Psychopath’s two accomplices were a very young and naïve French Canadian “Québécois” teen who loved the Freak enough to turn a blind eye at the truth that a part of her always knew existed.

The second one was another sicko, Ajay, so desperate for recognition and family, that he became a “Renfeld” to Alain/Charles, doing his bidding, however grizzly the job, just for the luxury of being the Alpha Clown’s right hand man.

I thought the series was riveting from the word “go” and was surprised to read the criticism by those far more experienced at reviewing, than I.

I’m all about: sans le disclosure. Those that measure each breath actors draw, were merciless with their critique. What am I missing?

Perhaps, my enjoyment stemmed from my not having had any knowledge of the piece beforehand? I had not read anything or seen any trailers before watching it. I was not informed, preferring to jump into the frosty waters unbeknownst.

I read that I wasn’t the only one ‘missing something’ with reference to critique. It has won a good many awards, nominations in quite a few categories, including music, costumes. The good reviews far outweigh the critique.

The series was created using a cross-cutting format between dates and times, filling in huge gaps of information, after the fact. This is a technique used in countless other movies, i.e., “Memento”, “Harry Potter”, “Star Wars”, etc.

There are two teams of critiques. Those who did not like the crisscrossing through time and those who preferred it and felt it added something positive to the series.

The actors were wonderful in my eyes except for the main character. I would have liked the Psychopath, Alain’s, character to have been more convincing; charming. He was too aloof and suspicious to have had anyone trust him enough to accept a handshake, let alone a venture to his crib. Nope-ity Nope, Nope, Nope.

The character that the actor attempts to portray, is that of a sociopath faking it till he makes it at being a distinguished gems dealer when his true source of financial freedom are the heinous acts he committed to secure those gems and all of his, Monique’s and Ajay’s wealth.

His two accomplices, Monique and Ajay, were curious as two people caught in the spiders web, jealous of each other’s relationship with the Freak, who; of course, played them both against each other, because that’s what narcissists do.

Couples, Henry and Angela, Nadine and Remi, along with the feisty Paul, are the heroes who; together, trek through danger, corruption, glass and vitriolic lunacy, to gather what they need to bring justice to the families of the missing.

You will fall in love with the stunning views and scenery. Brava to the Cinematography and Costumes Department for sharing their creativity.

Check it out. Send a little “peaceful vibe” out to the actual victims when you do check it out. I wish their families could’ve been compensated from the proceeds of the criminal’s book and this movie. That’s what I would have done. Perhaps, they did. No judgment, just saying.

There are spoilers in that link, fyi, so …