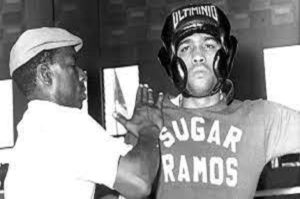 Cuban born, Mexican featherweight Sugar Ramos, 55-7-4, 40 KOs, fought at a time when people believed that things were simpler, more certain. The good old days were times, they tell you, in which we could all trust authority, believe in the goodness of our fellowman and invite strangers into our homes without fear of any threat. For Ultiminio Ramos Zaqueira, and that was his real name – a ring announcer’s nightmare – born in Cuba in 1941, living life and ending it in Mexico in 2017, that would feel like a luxury little afforded nor recognized.

His fighting prowess was on display from then until the year, 1960, that Fidel Castro came to power. He defected. He fled along with many other boxers, managers, promoters, trainers to where they could ply their trade. Ramos ended up in Mexico. His first professional fight there was on the 23rd of January 1961 when he stopped Jesus Santamaria in the 6th round of 10 in Panama City.
The need to remove yourself form your home and to get to a place of safety was paramount for Ramos and his dogged determination coupled with a long reach, broad frame and decent punching power meant he was soon to come to people’s attention and climb into contention.

If the fight to retain his freedom when he moved from Communist Cuba to Mexico was tough then on the 21st of March 1963, at Dodger Stadium, his 10th round knockout of Davey Moore was to prove a bigger fight: Moore died from his injuries two days later. It is likely to be this fight which is his most prominent remembered legacy as the 21 year old Ramos was crowned world champion with both the WBA and WBC. Moore’s death was caused by Moore’s head striking the bottom rope. The injury to his brain stem was so critical that he was unable to recover.

It was the second time that Ramos had been involved in the death of an opponent as Jose Blanco had previous suffered the same fate as Moore. It was Ramos’s 12th professional contest on the 8th of November 1958, in Havana.

On the 3rd of July 1963, he defended against Rafiu King, in Mexico City, winning on points, then on the 22nd of October 1963, in Wembley, London we got to see him stop Sammy McSpadden in the 2nd round – there were no belts on the line. Ramos then went on his travels again, this time to Tokyo to take on Mitsunori Seki, stopping him in the 6th, in defense of both his belts before taking a split decision defense on the 9th of May 1964 in Accra, Ghana against Floyd Robertson.

Having toured the globe to fight, coming home should have been triumphant.it wasn’t. he lost his two belts to Mexican Vicente Saldivar who forced Ramos to quit on his stool after the 12th round.

Ramos moved up to lightweight and managed to position himself well enough for a shot at Carlos Ortiz for the lightweight title in 1966 in Mexico City on the 22nd of October 1966. He was stopped in the 5th – the round that The Ring Magazine was to name its “Round of the Year!” stopped due to the severe bleeding suffered by Ramos – a cut eye that required 28 stitches. The stoppage was unpopular, Ortiz, now in his dressing room was spoken top by the WBC President who ordered him back into the ring to continue the fight. Ortiz refused, the WBC declared Ramos the winner, then 2 days later declared the title vacant and ordered a rematch.

In the rematch, Ramos, in San Juan, on the 1st of July 1967 lost that time by 4th round stoppage.

Ramos dusted himself down and continued fighting. On the6th of August 1970, he met Mando Ramos in the Olympic auditorium, Los Angeles and got caught in a war where both fighters ended up spilling more blood than was healthy. Thereafter he kept going back to the ring until 1972 but suffered diminishing returns. His last fight was against Cesar Sinda on the 24th of April in Inglewood. He was stopped in the final round of the 10 round contest. 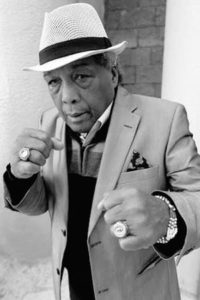 Sugar Ramos had a career that stretched over three decades, and he traded with the best of the time. In the 45 years, after he retired, aged 30, there is not much to find to update us. There are, however, the memories, which must be bright otherwise he would never have been no hall of famer. Finally, due to complications from cancer he lost his final fight in 2017.