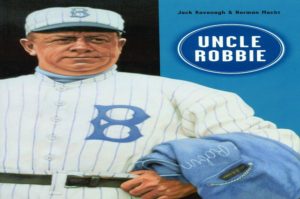 Uncle Robbie was many things. To curmudgeons everywhere, he was indeed one of us. A kinder gentler curmudgeon, but a curmudgeon at heart.

Dear Uncle Robbie was born as Wilbert Robinson. He found his calling in baseball, beginning as a minor league catcher in 1885. By 1886, he was in the major leagues, having joined the Philadelphia Athletics. He continued as a player with several teams until 1902.

Although he was a star catcher with an excellent batting average, he found his true calling as a manager.

It was in 1914 that that he was selected to manage the National League Brooklyn franchise.

This was the Brooklyn Dodger team, but during Robinson’s term, they were often derisively known as “Uncle Robbie’s Daffiness Boys.” Their curmudgeonly manager took the name in stride, although it highlighted the Dodgers many errors on the field.

He was a witty and often gentle man, but only a true curmudgeon could be a part of the early Baltimore Orioles team.

In the book, Uncle Robbie by Dr. Donald McKim, “the Orioles had a reputation for being ‘the toughest, rowdiest, dirtiest, most foul-mouthed team in history, unhampered by rules disdainful of umpires and authority.’”

And further proof of this well liked man’s curmudgeonness is the true story of a weird stunt of Uncle Robbie’s.

He had heard of the catcher, Gabby Street, catching a baseball that was thrown from the top of the Washington Monument.

And so, Uncle Robbie decided to do one better. This charming curmudgeon would field a baseball tossed from an airplane. He finally found a pilot who was willing to take part in the stunt. Her name was Ruth Law, and as a woman aviator, in that era, she needed to make a name for herself.

But, unlucky for Robinson, she forgot the baseball in her hotel room. She was able to grab a grapefruit from the lunch of one of the crew and decided to use that instead. She decided not to tell him about the substitution.

When the fruit made contact with Uncle Robbie’s glove, it came apart and spewed grapefruit juice all over him. It was travelling at over one hundred miles per hour. It knocked him to the ground; while the rest of the orioles laughed hysterically, because Robinson had closed his eyes, he thought he was covered in blood.

In 1923, Robinson led the Dodgers to Indiana to play an exhibition game with the Indians. The manager of the Indians was stunned to see them. He wanted to know why they were there. Uncle Robbie said, “Come to play you a ball game. The manager, Tris Speaker (former center fielder and now manager), laughed, “The game’s tomorrow.”

Although he was known as a friendly, humorous man, I know that he was one of us at heart, a curmudgeon.

Uncle Robbie was the perfect manager for the Daffy Dodgers. The team was known for their bizarre antics on the field and there were even times when several runners might pile up on one base.

And there is the time that he was going to start Oscar Roettger in the outfield, but Robinson realized that he couldn’t spell Oscar’s last name and so he said, “What the hell. I ought to start Dick Cox” And so, Dick cox started on that day. Only a gentle curmudgeon, like Uncle Robbie could do that.

Uncle Robbie, having managed the Daffy Dodgers, is definitely a kindly curmudgeon, surviving for years with the roughest, toughest team in Baseball, the old Baltimore Orioles.