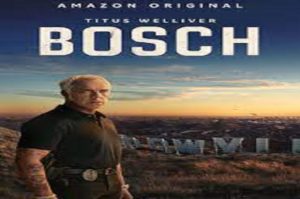 Just let that linger for a moment.

I was aware of the Michael Connelly books and his detective hero, but I don’t think that I was quite conversant of his backstory or impact on the crime writing genre.

The television series fixed that.

68 episodes and 7 seasons, running from 2014 to 2021 of a maverick Los Angeles cop who fought City Hall and for justice, the only way he could. It was enticing and hardly new, but this was a guy named after an artist who showed deftness and artistry in his investigations. Coupled with one of the most memorable and highly effective theme tunes – Can’t Let Go by Caught a Ghost – there was little in the whole incongruous package that did not fit.

An Amazon Prime production, it became one of the major reasons I kept subscribing – and yes it was that good.

At the end of the 7th season, when he handed in his badge I was gutted. I needn’t have worried.

The premise is simplicity itself. Hieronymus (Harry) Bosch is a Los Angeles detective who once worked on a highly successful film. That success brought him riches and allowed him to buy a property above the city of Los Angeles that gave him the type of panoramic view that cements the idea that he both knows and watches over the entire city. it also made him less reliant upon the good favors and patronage of any boss, though he sure knows how to play them politics games!

Each season we had a single case as focus, though we often found ourselves being taken off course and into his and other’s personal lives. Season 1 took as its focus not 1 but 3 of Connelly’s novels as Harry must thwart and solve the crimes of serial killer Raynard Waits.

Season 2 brought another 2 of the novels into play as Harry, after being suspended at the end of season 1, now has to solve the murder of a film producer. It is here we begin to get more backstory as Harry’s ex-wife and teenage daughter arrive in the plot with all the complications you might expect. Season 3 continues the idea of Harry and his back story as we get to hear about his mother’s murder from 16 years previously. Things get complex – his daughter comes to live, he gets romantically involved with an Assistant District Attorney, there is a Korean serial killer on the loose and we learn more about his upbringing where his mother was a prostitute.

Season 4 sees Harry being handed an opportunity to rid the streets of racial tension as the murder of a prominent Civil Rights attorney falls in his lap, whilst there are political machinations behind the scenes into him and his methods. A vital clue in his mother’s murder is also discovered. In season 5 that comes to haunt him even more as an old case comes back to him with questions attached – he is accused of planting evidence. Vultures circle. His daughter gets a job in the DA’s office and they both find themselves thrown together to defend Harry. The political ramifications go all the way up to the mayor’s, office as Harry also investigates an opiate ring in the city – after all ordinary police works still has to continue!

Season 6 finds Harry, investigating a threat to his city which is reminiscent to many terror-style threats to cities of our time. It sets up season 7 where Harry and daughter combine to thwart dangerous people and Harry decides enough is enough.

But not really. The final scenes show him handing in his private investigator application downtown at City Hall…

We are far from finished.

There are two major strengths which for me tip this from a typical to a tremendous example of the genre. Firstly, the source material. All of the seasons were based upon Connelly’s books and though Harry goes from a Gulf War veteran in the books to an LAPD detective of 20 years standing instead, the character remains intact.

Secondly, the cast. Titus Welliver is brooding, with the right amount of charismatic danger to keep you enthralled. Around him his partner, Detective Jerome Edgar, played by Jamie Hector is the perfect foil. Harry’s superior and supporter, Lieutenant Grace Billets played by Amy Aquino, has enough of her own personal issues to see beyond the politics and always be in his corner. The brooding is not restricted to the Police Building in the Hollywood division as Chief of Police Irvin Irving, played by Lance Reddick to perfection has to handle and deal with a man he knows is good but who others want to make bad. His daughter, Madelaine (Maddie) Bosch, played by Madison Lintz, perfectly shows a woman struggling to get to grips with her mother – a former FBI agent – and her father – a decorated cop with political vultures trying to bring him down – and find her own path in life. That becomes working alongside Honey “Money” Chandler, played by Mimi Rodgers, an ambitious and impressive DA, who knows Harry and with whom there is an eventual mutual respect. There are also a number of side characters who make it all worthwhile including Detective Santiago “Jimmy” Robertson, beautifully played by Paul Calderon, with a languid style of walking, which shows how much depth even the “minor” roles demand.

But my favorites are Barrel and Crate. Detective Moore (Crate), played by Gregory Scott Cummins and Detective Johnson (Barrel), played by Troy Evans are more than functional, more than the comedy pairing as they go about their business, often with a hint of future retirement in our minds. They were central to the dysfunction and the delight of solving puzzles.

And so, my fix of Titus and Hieronymus ended after season 7 and then it was announced that Bosch: Legacy had been commissioned and it is sitting in my Amazon Prime to watch list. I cannot wait…

Bosch managed to be both a procedural and a gritty crime drama with a literary feel which took it way above the standard 20+ episodes that are the usual American fare. The city of Los Angeles, like an extra character, hovers above it like a ghost waiting to intervene and show you the error of its own way. The overarching character, Harry himself, has more than depth. He guides you but the whole show is not over reliant upon him. As for does he solve his mother’s murder? You can find it on Amazon Prime to find out…