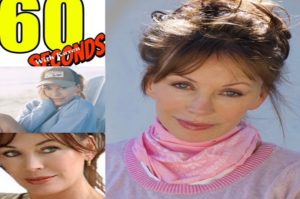 Lesley-Anne Down is best known for her great performance as Madeline Fabray in North and South and Jackie Marone in The Bold and the Beautiful. She acted with Kirk Douglas, Sir Laurence Olivier, Sir Sean Connery, and Sir Anthony Hopkins in movies.

KB: Did you always want to be an actress?

I wanted to be an actress since I was 10 years old.

KB: Georgina Worsley in the great show Upstairs, Downstairs: How did you get this part?

Georgina Worsley was a part that I auditioned for just like everybody else did in the UK.

KB: You starred opposite Elizabeth Taylor in A Little Night Music. How was it working with a legend like her?

Elizabeth Taylor became a friend, so it wasn’t like working with a legend. She was just a really good friend…

KB: People know you as Madeline Fabray in North and South. How was it working with Patrick Swayze and David Carradine who were total opposites in character in this show?

Playing Madelyn Fabray in North and South was just absolutely wonderful. Patrick Swayze was a dear friend. As was David Carradine who was actually at my wedding when I married Don… Yes, they were very different. but very special to me.

KB: You played with greats like Kirk Douglas, Sir Laurence Olivier, Sir Sean Connery, and Sir Anthony Hopkins. Can you recall how it was working with them? Were you intimidated sharing the screen with them?

I certainly have worked with some very very special people. They were all exceptionally different. None of them at all were intimidating to me… I got on like a house on fire with Anthony Hopkins. I suppose the only person that really intimidated me, but only for two minutes with Laurence Olivier: we met for the 2nd time, both late for the read through for The Betsy in the elevator…. Both hurried, laughing, and nervous so we got on famously.

KB: You played Margaret Thatcher in the movie Reagan. How difficult or how easy was it to play this iconic lady?

I am nothing like her in any way: it was the most difficult role I have had. Intimidating to give The Lady all she deserved. I felt humbled.

KB: Are you currently working on new things or is there something you would like to do but have not done yet?

Essentially, I am retired, and I will not get a booster so in the U.S it is not possible to work without one.

Share and get Brad past the 5 k mark.
Thank you https://t.co/KwYURTVx23

@BadBradRSR @RepMTG Another loud mouth know nothing who will hopefully be relegated to the trash heap of has been politicians after November. Everyone must make sure you are Registered to Vote then You Must Vote! People like MTG are killing our Democracy & Voting them out is our only hope!

Can you tell Debbie’s favorite college team in front of our door?

@BadBradRSR @electroboyusa Thank you for your service & standing against the traitors.

Donald Trump is a John Gotti wannabe but dresses in cheap suits (made in China).