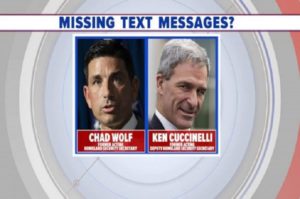 If you haven’t heard by now, the Department of Defense apparently failed to retain any text messages from top officials related to the Jan. 6th Capitol riot. American Oversight, a watchdog group that focuses on transparency, claims in their filed suit for the records that the Pentagon wiped the phones of Trump-era officials during the transition period between the Trump and Biden administrations.

American Oversight had filed a public records request for Trump’s former acting Defense Secretary Christopher Miller and former Army Secretary Ryan McCarthy’s communications on the days leading up to and on Jan. 6, 2021. Yet they were informed that the requested record had in fact not been preserved by the Pentagon and DOD officials. In a March court filing, the agencies stated that the “DOD and Army conveyed to Plaintiff that when an employee separates from DOD or Army he or she turns in the government-issued phone, and the phone is wiped. For those custodians no longer with the agency, the text messages were not preserved and therefore could not be searched.”

News of the data wiping comes after it was disclosed that numerous officials for the Department of Homeland Security had their correspondences erased during the transition phase, including both the “former acting Secretary Chad Wolf and his deputy Ken Cuccinelli” per The Hill’s report. Both of their phones were reset following President Joe Biden’s inauguration, which resulted in the deleted messages from Jan. 6, 2021. Last month, the DHS inspector general had notified Congress that text messages “from Jan. 5 and Jan. 6 (2022) were erased” stating that this was a common part of the process for the device replacement program.

The Secret Service, which had 24 individuals’ text messages go “missing,” remains adamant that any communications that are gone were lost during a “software transition.” The correspondences amongst officials and members of these organizations were almost guaranteed to shed light on why the National Guard had faced numerous delays for approval to respond at the Capitol once it was under siege. The lawsuit had also sought the communications between the military leaders, former President Trump, former Vice President Mike Pence, and former Trump Chief of Staff Mark Meadows who has been oddly silent recently since the live Jan. 6th Committee public hearings started.

Others whose communications were included in the group’s request were Kash Patel, Miller’s chief of staff; Paul Ney, the DOD’s general counsel; and James E. McPherson, the Army’s general counsel. Patel had also received a subpoena from the Jan. 6th House committee that is currently investigating the deadly Capitol attack. The group has now sent US Attorney General Merrick Garland a letter urging him to investigate who, what, where, how, and why the mass-deletion of such data was not preserved. They noted that every official’s phone that was wiped had only been done after the group’s records request had been filed.

Heather Sawyer, the executive director for American Oversight, wrote in the letter that the “DOD has apparently deleted messages from top DOD and Army officials responsive to pending FOIA requests that could have shed light on the actions of top Trump administration officials on the day of the failed insurrection,” referring to the Freedom of Information Act. She continued, “American Oversight accordingly urges you to investigate DOD’s actions in allowing the destruction of records potentially relevant to this significant matter of national attention and historical importance.”

At this time both the Department of Defense and the Justice Department have declined to comment. Nothing screams “cover up” like every important Trump official’s phone being wiped out without any preservation, and it would be one hell of a coincidence if it really was a system error. I truly hope at least some of these messages can be recovered because Americans deserve to know what happened, who was involved, and how deep the attempt to overthrow a free-and-fair election in this country went for a man with a terrible toupee and orange spray-tan.