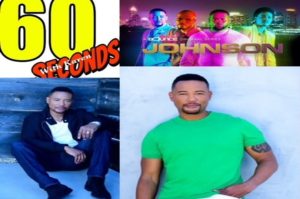 Derrex Brady is an actor who plays Jarvis Johnson in the highly acclaimed show Johnson on Bounce TV. He worked with Al Pacino in Simone and has a few movies coming out in 2023. Check him out!

KB: Did you always want to become an actor?

I always wanted to move people, but it was at the age of 7 that I realized I wanted to be an actor. I loved watching TV with my mother and that’s when I really wanted to be on TV telling stories.

KB: You are known as one of the Johnsons in the series Johnson: How did you get this part?

It’s really rare how I got the part of Jarvis Johnson. Deji and I knew each other from a previous film. A few years ago, we worked on another project for HBO. In passing he casually told me he wrote a script for a TV series and there may be a character in in the script for me. He asked me if I wanted to read it. I told him, “Sure, I’d love to read it.” I read it in three days and got back to him. I told him that I love the script and I really think I can bring some life to the Jarvis character. I learned that he talked with Thomas Q. Jones, his producing partner, and he also thought I would be good for the character. And just like that, I was cast. We shot the original pilot about 6 years ago and after shopping to networks, Bounce TV picked up the show. I’m so honored to be a part of the show.

KB: How was it working with Al Pacino on the movie Simone?

It was amazing working with Al Pacino. In fact, watching how Al Pacino works, seeing his approach to scenes was absolutely mind blowing. It was my first introduction into method acting. I remember our first day of filming we were doing a scene where he was playing a down and out director that was past his prime. No one really looked for his films anymore. So, we were doing a scene where he was vacuuming his own red carpet for the premiere of his latest film. He thought no one was going to show up for his premiere. Earlier that day before we began filming, he walked on set, kind of stumbling and his head was down. I said to him, “Hi Mr. Pacino”.

He gave a slight half wave, never looking up. I thought to myself, “Is Al drunk?” We shot the scenes from that day and the next day when we were filming, I was part of a group that was like a cult following for his character. We were a group that was obsessed with his films. We show up and we let him know we absolutely love his film; that was the scene. So, I saw him earlier that day and he was walking with some pep in his step. I saw him and I said, “Hi Al!” And he looked over at me and he said” “Hi! How are you doing?” And that’s when I put it together that he’s not just playing out these scenes, he’s living out the scenes. Whatever he’s filming that day, dictates how he lives out that day. So, that’s where I first learned about method acting and it’s how I approach my screens and my relationships with other characters to this day.

KB: Are there any people you would like to work with and why?

I really want to work with Denzel Washington. Denzel is one of my favorite actors and I almost worked with him on a film. I just love the way he lives in a scene. Also, I’ve heard that he approaches a scene almost every time differently. That is amazing to me. He has been on my vision board since 2020 and I have no doubt in 2023…2024 I will be blessed to work with him with a significant role on a project.

KB: You are involved in the charity Young Warriors: What does it do?

I’m so proud and honored to be involved and support Young Warriors. It’s an amazing non-profit geared at helping fatherless boys. The organization was founded by a good friend of mine, Jason Hill. He was born of a drug addicted mother. He’s never met his father and doesn’t even have an idea of what he looks like. Jason grew up in Akron, OH. Once he landed in LA and settled, he started a non-profit that he would have wanted to be a part of when he was a kid, Young Warriors. Young Warriors helps fatherless boys have experiences that they may never have had. They teach fatherless boys everything from how to tie a tie, to how to do and present power point presentations, to how to look someone in the eye and shake hands.

I mentor and contribute to the non-profit when I can and it’s exactly the type of program, I would have loved to be a part of when I was a kid with a single mother. Jason has now partnered with Hall of Fame Eric Dickerson. The two have collectively come together to break as many cycles as possible, helping young fatherless boys learn the meaning of becoming a man and contributing to society.

KB: If you would be the Lead in a movie and you could pick the director and 3 co-stars: Who would you pick and why?

Being a lead in a movie is fun and exciting. The director I would love to work with is Antoine Fuqua. Antoine directed some of my favorite films and directed my favorite actor, Denzel Washington. The 3 the co-stars I would love to work with would be Denzel Washington, Russel Crowe, and Angela Basset. All three of these actors are the epitome of excellence and masters of their craft. Scenes are full of magic when you work with the caliber of these type of actors. I’ve experienced it when I’ve worked with Al Pacino, Melissa Leo, and Blair Underwood.

KB: What are you currently up to outside of Johnson? Anything new being released or working on?

Right now, I’m solely focused on Johnson and getting as many people as possible to know about our show. Outside of Johnson, I have a couple films coming out in 2023. One is “A Snowy Day In Oakland”, starring Nicole Ari Parker, Deon Cole, Kimberly Elise, Evan Ross, Michael Jai White, and Loretta Devine. I play the son of Loretta Devine, who is an FBI Agent. Another film I have coming out is called “First”. I am a stockbroker and I play the older brother to Will Catlett (True Story with Kevin Hart). It also stars Jahmelia Yarbrough (Killing Lazarus) and Desean Terry (The Morning Show). It’s an amazing film about ‘firsts’ for two childhood sweethearts who as adults find their way back to each other.

.@RepMTG I think you should go In Search 🔍 Of your other two toes!