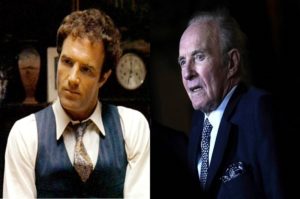 How do you do justice to the career of James Caan?

To be honest, I don’t think you can, unless you close the curtains, hunker down and watch his entire cannon of work.

And make sure you have plenty of snacks, because this is some career to witness.

Born in 1940, and recently deceased, Caan is the epitome of a solid and brilliant character actor. Of course, his seminal piece of work in The Godfather defines him in the eyes of so many but there is so much more to love and enjoy. The Godfather brought him a nomination for an Oscar. Other work performances brought him two Emmys, four Golden Globes and his star on the Hollywood Walk of Fame in 1978.

He was born in The Bronx – even in the UK it has resonance. Son of a kosher butcher he decided not to follow dad into the trade, and we are much the richer for that. Caan went to Michigan State University to complete his education before transferring to Hofstra University where he was classmates with a certain Francis Ford Coppola and Lainie Kazan. He then moved to the New York Neighborhood Playhouse School of Theater where he studied for five years including under the tutelage of Sanford Meisner.

Now for some the name Meisner means absolutely nothing. For those of us steeped in theater, it tells us that Caan had one of the very best of teachers and a man whose influence on the stage went way beyond his lessons. Caan, having had that grounding went on to be prolific in the theater. Appearing in off Broadway shows he was making his way in a career which was very much one in which he had fallen in love; in short, he was serving a solid apprenticeship.

It included a stint on Broadway as well as breaking into television in a wide variety of well-known shows and a similar variety of parts; his first significant acting credit was a small role in the 1961 Broadway production of Blood, Sweat and Stanley Poole, a second world war play by William Goldman and his brother James. The 1960s were clearly the decade in which he was learning his craft as well as showing that he had the potential to do exactly what he went on to do.

He achieved leading man status in 1965 in Howard Hawks’ stock car racing drama Red Line 7000, then came acting alongside John Wayne and Robert Mitchum in Hawks’ 1966 western El Dorado. Robert Altman then cast him in the 1967 space film Countdown, followed in 1969 with The Rain People, directed by Coppola. Caan, who had once thought he might be a football star, played a hitchhiking former college football star.

Arguably, the 1970s was the decade in which he showed us just how well he had learnt that craft.

After The Godfather came The Gambler in 1974, and the musical, yes, a musical, Funny Lady in 1975, alongside Barbara Streisand. Caan had depth but he also had breadth. It was also the decade he made choices to decline roles from which other actors made iconic performances including Blade Runner, Apocalypse Now and Close Encounters. If he was famous for The Godfather, then he became infamous for all the roles he refused. It was during this time too that his reputation as a hard drinking man of the world was created and ruthlessly exploited – usually by him.

Had he taken even one of those iconic roles, his next decade might have been more comfortable. He found himself deep in a depression, especially after his sister’s death from Leukemia as well as both burnout and far too much reliance on cocaine. The decade had started well as in 1981 when he appeared in Thief which was much praised and a slow burning critical success. It was a film of which he was as proud as he had been over The Godfather. From 1982 until 1987 though, we never saw him act on celluloid. To compound or force his own decision he had walked out of the Robert Ludlum thriller The Holcroft Covenant where he was replaced by Michael Caine.

Instead of working the camera he worked as a sports coach with young people until the pay he had enjoyed was so far distant he needed to return to work. His return was with Coppola in Vietnam drama, Gardens of Stone and then Alien Nation before a support role in Dick Tracy. He needed to work – he had to eat and pay bills…

Then came Misery. It reintroduced many of us to his versatility as he played under the direction of Rob Reiner perfectly. Whilst many would turn down a role where he was bed bound for large parts of the movie, he knew the absolute opportunity if silence and immobility. He nailed the acting lesson for us all.

The decade continued in the 90’s with films like Eraser with Schwarzenegger and Bulletproof with Adam Sandler he showed the world what he had to offer in any genre. But for many it was the archetypical gangster for which he was the standard and when the opportunity came to play such a role opposite Hugh Grant in Mickey Blue Eyes, for some, it was a quintessential look if not the epitome of his acting skills.

The dawn of the 21st Century continued this diverse return onscreen as he wavered from The Yards with Mark Wahlberg to the Undercover Grandpa and appearing alongside his son, Scott Caan in the Hawaii 5-0 reboot.

But he managed to, once more, set the heather alight with two performances in the early part of the century for which he reached the stars. And they could not be further from each other, though they both were screened in 2003.

Dogville, by Lars Von Trier got a Palm D’Or nomination at Cannes and boasted a cast that included Caan, John Hurt, Nicole Kidman, Lauren Bacall … the list goes on. It tells the story in 9 episodes of a young woman hiding from the mob. Caan played “The Big Man”. When released it spilt critics but, over time, it grew into itself, and it is now seen as an avowed masterpiece of cinema. It gathered critical reviews filled with hyperbole and many, many awards. That Caan was involved was no guarantee of anything, given the impressive list of people attached but once more he showed he could act in exalted company.

But he was far from full of his own importance.

Because in 2003 he was also in Elf with Will Farrell.

It is the film for Christmas, with Caan playing every distant, aloof and emotionally disconnected tycoon as the father who needs to be turned to see the child he should love. For generations of kids, Caan became the epitome of a man turned when is life is filled with the Christmas spirit. By the end his good cheer is part of how they lift Santa’s sleigh, almost as high as his presence on celluloid lifted your expectations when you sit to watch one of his films.

Of course, there are duds. And we can gripe about his political point of view which saw him endorse Trump in 2016, but what you cannot criticize is the cannon of work. It was a testimony and legacy that speaks more volumes than mere words can so, as I said, you cannot sum up this man’s work.

Fortunately, you can go and see it instead.