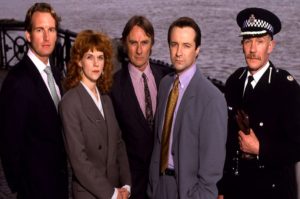 Of course, the theme tune, also got me as it was composed by a member of one of my all-time favorite bands – the keyboard player from Gillan – Colin Towns and it had high production values as it was produced by the BBC and was a primetime offer.

The original attraction for me, however, was beyond that original idea and the music, but the fantastic performances from Neil Pearson, who played Detective Superintendent Tony Clark, Tom Georgeson who played Harry Naylor, and Siobhan Redmond who played Maureen “Mo” Connell. They were the focused and principal team of investigators within the Metropolitan (London) Police Force who were tasked with rooting out police corruption.

Aided, some might have suggested often hindered, by their boss, John Deakin who was played by Tony Doyle, they managed 3 series and 35 episodes. I thought there was plenty of legs in the show and it should have been allowed to develop from within the police force, but the narrative switch gave too much leeway to the imagination as the team were taken out the force and became corporate lackeys. We, the audience needed anchored and they, the characters got hijacked.

The original premise was simple – Detective Superintendent Tony Clark was the head of the Complaints Investigation Bureau (CIB). He was ambitious and flawed. It made an interesting choice for the head of the unit as he was often caught in his own compromising positions, not least when trying to successfully navigate a divorce. He is aided by both Harry Naylor and Maureen “Mo” Connell.

It began by being quite the hit and the BBC even got a BAFTA in 1994 for best drama series for it. The rooting out of corruption by a unit with an ambitious head which was directed by a superior officer who turned out to be dodgy himself had plenty of twists and turns for us all to enjoy. Throw into the mix real life scandals in the police force of the time and the heady mixture caught the spirit of the 1990s and managed to present quite the complex picture in a creative manner.

Deakin also presented a very British complexity, as he had been part of what is now a disbanded force – the Royal Ulster Constabulary. Their part in the Troubles in Northern Ireland was always one for debate and here it was caught in a mainstream drama, not as the principal focus, but as a side issue that managed to pervert much of the ending of the first series.

Deakin went out to “security services” afterwards and became a recurring presence that haunted much of the second series. At the end of that the rest of the team were out of the force and then the wheels, for me, began to fall of this bus. Investigating Far Right groups in private security their relationships began to become strained, and credulity was a little stretched. It meant they were no longer investigating corruption, because all four of them were out in the cold, away from that heady mixture.

The third series didn’t really attract as much attention as the first two series had – why? Because it changed the premise far too much, in my humble opinion.

I was attracted to the idea of there being good guys in a good guy place who fight against the bad guys we all knew existed in the good guy place. Remove that reason for being and we just end up with another cop show. By the end we also found Clark and Naylor betrayed by Deakin and Connell with doubt over the fate of the first two characters – we do not get to know if they survived.

What it did do was to introduce, as a side issue and not as principal focus, a bisexual character in Mo Connell. Mo had a serious boyfriend in series two followed by a long-term girlfriend. It broke new ground for British television audiences and hey! They did not switch off! That is not to say they presented an unreal picture without disapproving glances and comments made by characters that were dubious. We got the lot, but we also got sensitivity and some of the casual banter which was normal between work colleagues in the context of Mo’s private life.

The development of a CIB to investigate corruption within the Metropolitan Police Force in London was real. The way the police force in the UK has developed since then has become more effective and more efficient – not necessarily better. The CIB was the beginning of a process to root out corruption and this show managed to show that effectively and with some degree of reality. The real CIB, like the fictional one, struggled to be given their proper place and were often seen as the problem more than the corruption which was evident.

I felt that the characters might have had sufficient depth to maintain many more series, but it was reported that Pearson himself was less than keen to continue and he wanted a final ending which he basically got. Had they stayed in the force, rooted out John Deakin and continued then I think further series would have been a bigger influence on the development of a public who wanted to see a better force. As it is, the show that came in to continue the fight against police corruption – Line of Duty – ironically with another Northern Irish copper at its head – managed that instead!

@BadBradRSR They did their country proud.