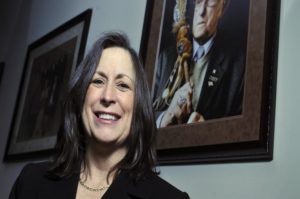 In 2010, Marilynn Malerba became the first woman selected to be Chief of the Mohegan Tribe. The tribes’ Council of Elders appointed her to this lifetime position.

This is not her only first.

On June 21, President Biden announced the appointment of Marilynn Malerba as Treasurer of the United States; the first Native American to hold this office.

And it’s a done deal! She does not need to be confirmed by the Senate.

Our new United States Treasurer has a lot on her plate. She is directly responsible for overseeing the operations of the United States Mint, serves as the liaison with the Federal Reserve, and oversees the Bureau of Engraving and printing in Fort Knox.

Malerba will be a senior advisor to Secretary of the Treasury, Janet Yellen.
“For the first time in history, a Native woman’s name will be the signature on our currency. With this announcement, we’re making an even deeper commitment to Indian Country,” said Yellen

Chief Malerba will have very little free time as she has also been chosen to be the leader of the newly established Office of Tribal and native Affairs.

What kind of background does this female Chief of the Mohegan Tribe have? A very impressive one, indeed.

Her other hat is that of an RN, who served as the Director of Cardiology and Pulmonary Services at Lawrence & Memorial Hospital.

Malerba earned her Bachelor of Sciences in Nursing degree from the College of St. Joseph, and a master’s Degree in Public Administration from the University of Connecticut. She went on to become a Doctor of Nursing practice at Yale University where she was a Jonas Scholar.

(From the Yale University School of Nursing site: “The scholarships are given by Jonas Philanthropies to improve the quality of healthcare by investing in nursing scholars whose research and clinical foci specifically address the nation’s most urgent needs, such as preventive health, psych-mental health, and Veterans health”.)

Currently, she is a member of the Treasury Tribal Advisory Committee which means that she advises the Secretary of the Treasury on matters related to taxation of Indians and is involved with the training of Internal Revenue Service field agents.

The Chief is a Trustee for Chelsea Groton Bank, a board member for the Community Foundation of Eastern Connecticut and she is on the provost’s Advisory Committee for Harvard University’s Native American Program.

She is indeed a superb choice for Treasurer of the United States.

For the first time, our paper currency will bear the signatures of two women: Secretary of the Treasury, Janet Yellen and tribal Chief, Marilynn Malerba.