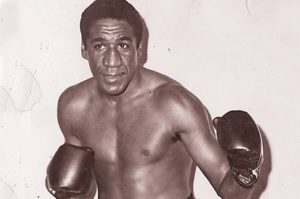 For those of us, even of a certain age, the Cuban Revolution and its effect upon the world, alongside events like The Cuban Missile crisis are consigned to the history of our parents and yet the effects of these historical events have repercussions we still feel today.

For Luis Manual Rodriguez, 107-13, 49 KO’s, “El Feo”, (the ugly one!), that meant, like so many Cuban boxers, leaving the country of your birth and settling in the United States to continue your career and enjoy the freedoms denied in your homeland. It meant that the world was to witness the beauty of his prowess in the ring which brought him world titles in the welterweight and middleweight divisions and allowed him to fight over 100 times as he provided a better life for himself.

Now, for most boxers who put away a century of contests in the ring that would usually mean they had a majority losing record as they would be journeymen who are scraping by. Not Rodriguez…

For Rodriguez was a master boxer. He was a quick counterpuncher and very hard to hit. His favored punch – the bolo.

Before arriving in the United States, Rodriguez turned pro in pre-Castro Cuba. On the 2nd of June 1956 he knocked out Lazaro Hernandez Kessell in the 3rd round of a scheduled 4 in Havana. His first US fight was on the 17th of June, 3 years later in Miami Beach when he beat, on points over 10 rounds Virgil Akins.

Eventually he was taken under the wing of legendary trainer, Angelo Dundee and trained out of the world-famous 5th Street Gym in Miami Beach. It was rumored that Luis was so stylish was Luis, that another boxer who trained at Miami’s 5th Street Gym stole some of his moves for himself – a certain Muhammad Ali.

His career included a number of incredible runs of form but also notable scraps. In 1960, that included taking on Emile Griffith for the first of four times. The first fight, in Madison Square Garden, on the 17th of December 1960 ended in a split decision loss before they met again on the 21st of March 1963, when Rodriguez captured the two welterweight titles by unanimous decision (9-5, 8-5 and 8-6 on points).

Six months later in the very same venue as the first fight – MSG – on the 8th of June 1963 – Rodriguez lost the WBA, WBC and lineal welterweight titles by split decision.

Rodriguez battled him again for the title in 1964 – the 12th of June in Los Angeles – but once again Rodriguez lost in his attempt to win the title back – again on a split decision.

Each and every fight was tight. The most that Griffith could beat Rodriguez by was three rounds. Griffith was a legend but that made Rodriguez one too.

Whilst his career was stellar and had many highlights there were two incidents in his life which were of note. The first was being hijacked back to Cuba! Easter Airlines Flight 202, flying from Miami to Dallas, Texas on the 24th of July 1961, taking Rodriguez to fight Curtis Cokes was hijacked and diverted to Cuba. You can but only imagine what Rodriguez thought was likely to happen to him, a Cuban exile. The plane and its passengers were, however allowed to return to the States by the Cuban authorities and the danger was lost for Rodriguez.

He did meet Cokes in the ring later on, losing a split decision on the 3rd of August over 10 rounds in the Memorial Hall, Dallas.

The second being when his fight career included spells behind the microphone. He was providing commentary for the featherweight fight between Davey Moore and Sugar Ramos in the Dodger Stadium on the 21st of March 1963. Ramos won by stopping Moore but the tragedy which followed was Moore’s death and it provided Rodriguez with a bit part in the event. The event itself is immortalized in the song by Bob Dylan, Who Killed Davey Moore.

Once he had tried his hand at welterweight, he decided the time had come to move up to middleweight and had some notable scraps there too including two fights with Rubin Carter – both of which he won, in 1965.

In November of 1969, he was after the WBA and WBC middleweight titles and travelled to Rome in Italy to take on Nino Benvenuti. Rodriguez was in command until in the 11th round, Benvenuti caught him perfectly with a left hook, leaving Rodriguez on the canvass for a good 5 minutes. Given what had happened in his presence before for Davey Moore hearts will have been in mouths.

He retired in 1972, his final fight against Donato Paduano was in Montreal on the 12th of April that year. In 1997 he was inducted into the International Boxing Hall of Fame. Further accolades followed in 2009, when the Ring Magazine heralded him the 3rd best Cuban boxer of all time. Given the pedigree from such a small island, this is no mean feat nor minor victory. Rodriguez may be gone but it is up to us to remind ourselves of just why he is worthy of remembrance.