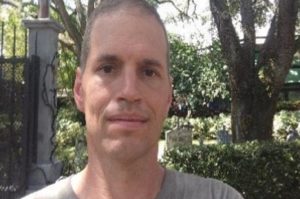 At this time, it seems that Shiffer acted alone. Yes – that means a guy that failed at overthrowing the US government with a group of people failed at trying to overthrow the FBI by himself. The lesson here? Amazon two-day prime body armor does not protect you from getting killed.

The Washington Post revealed on Thursday that the classified documents retrieved in the FBI search warrant conducted at Trump’s Mar-a-Lago were related to “nuclear documents and other items.” Considering an informant (or informants) were the main sources that led the DOJ and FBI to the documents, and that the feds already obtained video surveillance footage of Mar-a-Lago for June through August — which was handed over by the Trump Organization who must have not told the former guy — it is pretty clear that a huge shift is happening in the numerous investigations against Donald Trump.

So why would a man like Ricky Shiffer be so willing to lay down his life for the Dorito Gambino? A quick glimpse at his social media pages reveals that Shiffer had been down the Trump rabbit hole for quite some time. Election fraud, the deep state, witch hunts — his posts sound like Trump’s banned Twitter account. In blatant terms, Ricky Walter Shiffer is another Ashli Babbitt. He was ready for a Civil War and showed up to the fight alone while Trump comfortably rages on Truth Social from the comfort of his golden toilet.

It’s unfortunate that another American had become so entangled in the former president’s lies, and now another family has to plan a funeral over a conspiracy theory. Republicans will likely send their thoughts and prayers, and just continue to push a dangerous narrative against our federal law enforcement agencies. The GOP has gone from “back the blue” to “defund the blue” real quick.

In all honesty, I predict that this isn’t the last time we see a “well regulated militia” attack our institutions. Considering the severity of the situation, I anticipate that a lot more will come out about what Trump was planning on doing with our country’s greatest national security secrets. My guess is that he was likely trying to sell them (cause grifters gonna grift) to either the Saudis, who were just here for the LIV golf tournament, or the Russians, who likely sent Nazi Hungarian PM Viktor Orban to speak at CPAC; and someone close to Trump decided this was 1) too grave of a danger to the country, or 2) now was their shot to negotiate a deal with federal investigators to avoid prosecution and/or a harsh prison sentence.

Patience is a virtue, folks. Attorney General Merrick Garland moves silently like the ‘g’ in lasagna — and he’s about to sneak up on a lot of Trump co-conspirators. Hopefully in a few months his findings will wake up enough Americans to stop drinking the koolaid and realize the enemy isn’t our institutions who protect us, but it was the man that led them from the walls of the Oval Office that he covered in ketchup.