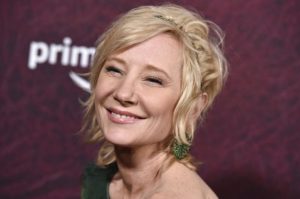 Film and television actress Anne Heche, 53, known for her roles in films SIX DAYS AND SEVEN NIGHTS (1998) and DONNIE BRASCO (1997), passed away from injuries she sustained from an LA car crash she was involved in on August 5, 2022, when the car she was driving crashed into a house, resulting in both the house and her car catching fire. She was rescued from the fiery crash on a stretcher and was transported to a hospital. A few days later, a spokesperson for Heche said she was in a coma in extremely critical condition, with medical ventilation required for pulmonary injury. On August 11, it was reported that Heche was not expected to survive due to an anoxic brain injury, and that she was kept on life support to determine which organs were viable for donation, in accordance with her expressed wish to be an organ donor. After being declared brain dead, Anne Heche passed away on August 12, 2022, leaving behind two sons. Anne should be remembered, not for her tragic death and the circumstances that led to it but for what she gave us while she was alive, and that was a long string of memorable performances which spanned over 3 decades in film and television.

Heche began her career in the late 1980s when she was cast in the dual roles of Vicky and Marley on the now-defunct daytime drama ANOTHER WORLD. For her work on the series, she received an Emmy Award for Outstanding Younger Actress in a Daytime Series in 1991. Like most soap stars, such as Sarah Michelle Gellar and Demi Moore, Anne left the soap world and focused on primetime and film work. Anne made her primetime debut in an episode of MURPHY BROWN (1988-2018). The following year she made her TV-movie debut in the Hallmark Hall of Fame presentation of O PIONEERS! (1992). In 1993 she made her feature film debut in DISNEY’S THE ADVENTURES OF HUCK FINN. Anne continued to work steadily and was given opportunities to star alongside some of the biggest stars in Hollywood, such as Harrison Ford, Robert DeNiro and Johnny Depp.

Ringside Report sends our condolences to Anne Heche’s family during their time of grief.