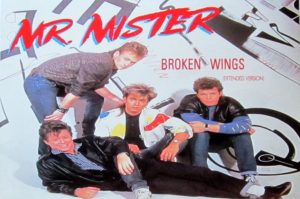 Richard Page and his friend Steve George form the band, Pages. With one small hit “I Do Believe In You” and 3 albums the band had no success and split up in 1981. In 1982 Page and George gave it another try with drummer Pat Mastelotto and guitarist Steve Farris. They called themselves Mr. Mister. After the release of the first album, I Wear The Face, Richard Page was offered 2 new lead singing jobs in Toto and Chicago, he refused both. Along comes album number 2 in 1985: Welcome To The Real World with the world-wide smash hits Broken Wings and Kyrie. We all know the video for Broken Wings: a car with the top down on an endless highway somewhere in America. Shot in black and white. It was brilliant.

The third album Go On… was not a success and that was it for the band.

Richard Page is working on solo projects and has been part of Ringo Starr’s All-Starr Band in 2010, 2011, 2012, 2013 and 2017. Steve George is retired from music, lives in Arizona and plays occasionally with local bands. Pat Mastelotto joined King Crimson as a drummer in 1994 and has been playing with them ever since, making him their longest serving drummer. Steve Farris is a session musician now who lives in Fremont, Nebraska and picks up jobs as they come along.